Interesting stories about famous people, biographies, humorous stories, photos and videos.
Home All posts Sun for Diogenes and half of the world for Alexander the Great’s
Facebook
Twitter
Pinterest
WhatsApp 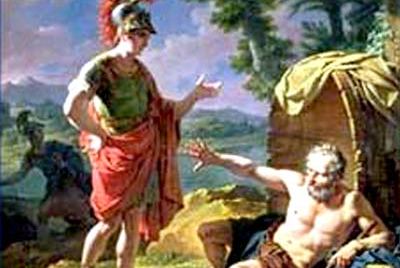 The great man of wisdom of antiquity Diogenes was reputed among his followers to be not only a little bit odd eccentric man, who lived in a tub but also quite a witty and interesting interlocutor. In addition, besides some of his peculiarities, he aroused respect among the citizens of Crania.

The thing is that Diogenes founded a new philosophical stream, which we all know nowadays (but with twisted meaning) as cynicism. Diogenes the Cynic (or as they used to say in Greece ‘kynic’) used to ponder over the uselessness of everything that is unnecessary and everything superficial – money, values, expensive and multifarious clothes everywhere. Nowadays the followers of Diogenes are called not cynics, but ‘downshifters’ – people who gave up material benefits for the sake of spiritual or mental tranquility, peace and balance. Just like the kynics of today, downshifter Diogenes tried hard to convince the world (as a matter of fact, he convinced those who he came across with) that the most valuable and the dearest treasure is given to a human being when he is being born. And this treasure is life itself. But still self-interested, mercenary-minded and hard-hearted citizen of Crania had a good laugh at the philosopher even though they actually respected his steadfastness and allegiance to the path he had chosen.

One day, Alexander the Great himself happened to turn out in Crania when passing through. The greatest commanders of all times and nations was renowned not only for his innumerable war and love victories. He was also famous as a lover of wise aphorisms and philosophical discussions.

Naturally, Alexander the Great couldn’t miss the opportunity to meet the philosopher who was well-known in the whole Greece. The commander’s servants informed Diogenes that Alexander the Great in person wished him to come and have a philosophical conversation. The sage displayed a rather cold attitude towards Alexander’s desire. He didn’t come to the audience on time, and to make things worse he even got lost in the city crowd.

The King was quite bewildered because of such disrespectful attitude towards his important figure but he suddenly remembered that apart from disapproval of material and physical values the great philosopher and cynic and the fist downshifter in the world at the same time never showed any respect towards authorities as such. Therefore Alexander calmed down a little, got a grip on himself. He made up his mind to deal with the philosopher on his own and thus the great commander headed to the streets in search for the sage. He thought that obviously Diogenes had nothing bad against him personally, evidently he just didn’t admire him as much as others did.

It took Alexander much time and efforts to find where Diogenes was, but finally, when he was wandering about remote streets of Crania, he found the philosopher. Alexander the Great immediately came up close to Diogenes and began examining his appearance, as he heard so much about him. Alexander felt nothing but high respect when he got to know about the philosopher’s life principles and attitudes.

It is worth mentioning that the commander Alexander the Great always gave a very high praise to various kinds of sages and philosophers. He believed them to be people of fortitude and courage, with very strong minds. Alexander was extremely amazed by the simplicity of the philosopher’s appearance and by the depth of his image at the same time, thus his face softened and he was satisfied with Diogenes’ looks so much that he made up his mind to please him at any cost and give him some princely gift.

Therefore the greatest commander, king and conqueror Alexander the Great asked the old marginal philosopher Diogenes, who lived the whole of his conscious life in the tub and always was wearing rugs, what he wanted to have as a gift from his king.

The sage, who was at that moment sitting in the dust on the side of the street, lifted up, looked at Alexander and responded that the best gift the commander could give him was stepping aside as he was standing in his light. That was the first time when the great king gave way to his opponent – he stepped aside as he was asked to.

According to those people who witnessed this scene, the commander was amazed and touched by Diogenes’ wisdom. He kept repeating that the king needs the whole world to be happy, and all the man of wisdom needs is the ray of sunlight.

Alexander the Great said that evening: ‘If I weren’t the king, I would like to be Diogenes!’.