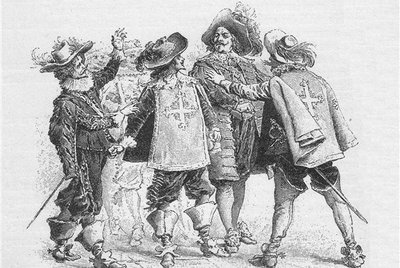 Thanks to genious novels of Alexander Dumas the word ‘musketeer’ is nowadays for lots of people (especially Dumas’s readers) associated with resoluteness, honour, resourcefulness, valour, prowess and some other positive traits. But boring historians claim with one accord that all this is nothing more and nothing less but a simple fiction – a fable so to say. They assure that musketeers could often turn out to be lowdown, mercenary creatures who drank a lot and were rude martinets. But one French musketeer named D’Avejan managed to prove the contrary as though he did it to spite all the historians with their narrow views. He proved to be a very decent and respectable person, was quite resourceful, had a ready wit and a good temper.

One day Mrs. De Prie (the regent’s lover and tax farmer Plenef’s daughter at the same time) followed her father’s advice and bought the whole harvest. Naturally, despair spread all over, people were shocked at such daredevilry and they grew very angry. That was why pretty soon there were a lot of disturbances in the neighbourhood, occurring everywhere.

Sir D’Avejan and his company of musketeers were sent to put down the citizens who had already flown into a rage. D’Avejan got an order, and there he was asked to open fire at ‘dirty scums’! Haughty and puffed up noblemen actually liked to call common French people ‘dirty scums’. It has already been mentioned that D’Avejan was a normal and decent man, and of course he was not going to shoot in cold blood poor and defenseless inhabitants of France. All in all, rebels had all the good reasons to stir up a mutiny against nobles. But on the other hand, valorous musketeer just couldn’t disobey the order.

Still, sir D’Avejan finally found a way out of this difficult dilemma. He gave an order to his musketeers to get ready to open fire, meanwhile he took his time and didn’t order to actually blaze into action. Instead he came up to mutineers, holding a paper with the order in his hand. He told people standing around the following: ‘Dear sir and gentlemen, I got an order to open fire at dirty scums. Before I do that, I’m going to ask everyone but dirty scums (he obviously meant all honest and decent citizens) to leave this place.’

As it turned out, the mutineers that gathered together that day, were one and all honest people since they all disappeared into the thin air in no time.