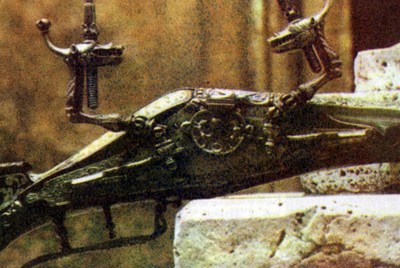 The appearance of rifled guns caused broad resonance among military authorities, hunters and other gun- lovers. They all just admired the guns of new type. These brand-new guns allowed to shoot very accurately as if by magic. Indeed at that time citizens tried to explain an amazing accuracy by miraculous powers. For instance, one practitioner of black magic who called himself a warlock, Moresius of Bavaria by name, in 1522 described with every little detail the reasons of good influence (surely of supernatural nature) of grooves on the flying path of bullets. Of course the respectful warlock-theorist didn’t find time to think it over and discover that it is the wind power that influences the flying trajectory of the bullet, because Moresius’ version was so much more picturesque and interesting.

The warlock explained: ‘There are demon – little evil creatures, the spirits of mischief, who in fact might influence the flying trajectory of bullets. They do nothing but annoy all the time those who fire a gun. But thankfully no dirty devil can possible hold on to the bullet which spins with breakneck speed, that is why bullets belonging to rifled guns fly directly and precisely. The main evidence of the theory was absolutely absurd and nonsensical as well. Moresius claimed that there are no demons in the sky which spin permanently around the earth, but there is a great number of demons here on our Earth – which stands still!

Just like any other weird theory, the theory which Moresius made up became the object of mass discussions. That’s why some smart fellows decided to carve out a name for themselves too. They made up a theory, even more stupid than the warlock’s one, about the accuracy of rifled guns. They cooperated with each other and at last they explained their theory which was in fact the most grandiose brainchild of the whole foolishness of humanity.

Moresius’ opponents had came up with the opposite version: those demons were not afraid of spinning objects, just on the contrary, it was their favorite place of activity. That’s why the accuracy of rifled guns can be explained by devilry. Thus, in 1547 one guild of marksmen from a nice city called Mainz which was situated in the central part of Germany, thought that ‘the proof of the pudding is in the eating- and decided to prove all these foolish things.

The experiment consisted in the following: two dozens of shots (with ordinary lead bullets) were made on targets which stood away from riflemen at the distance of two hundred yards. After that marksmen fired at targets again with two dozens of bullets, and this time bullets were not plain, but they were cast in pure silver and had three little crosses scratched on them (what is more, those crosses were blessed three times). Nine out of ten ordinary bullets hit the target, but every super-consecrated bullet successfully missed the target. For uneducated, even ignorant common people of the town (and even for much more educated and literate citizens as well) this ‘phenomenon’ immediately became a very cogent evidence of the fact that devils and demons for all that prefer spinning bullets. Therefore clergymen forbade ‘devilish’ weapon on the territory of town, and conscientious inhabitants unanimously gathered together, put all the rifled guns in one pile and committed it to the flames.