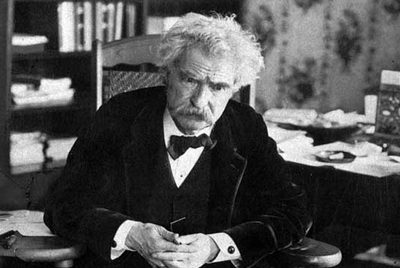 The world-known American writer, journalist and famous public figure Samuel Langhorne Clemens, more known as Mark Twain, came down to history also as a distinguished wisecracker. A lot of writers, rich people, editors and just random acquaintances became targets of his sharp sarcasm. A separate page in his life was devoted to Twain’s relationship with criminals, shady dealers and just roguish folk.

Once in the newspaper (where Mark Twain was the editor) there appeared a very acrimonious article written on behalf of our hero. The published article was about some notorious fraud. The publication was finished with such words: ‘Mr. N doesn’t deserve even spitting in his face’.

The object of derision felt offended and he made up his mind to sue the author of the article. During the session it was decided that the newspaper was to publish a disclaimer. Our wayward writer accomplished the trial’s acquirement in quite a specific way. The next article published in newspaper said: ‘I’d like to speak about that article about Mr. N that was written and published in our newspaper the other day. We have changed our opinion on Mr. N’ traits of character and abilities. And now we are ready to announce: ‘It’s not true that Mr. N didn’t deserve even spitting in his face. Just on the contrary, Mr. N deserved spitting in his face.’

Mark Twain once had even a more caustic remark, when he was asked to give some commentaries upon the subject of several criminals who had robbed the writer’s country house and finally were captured by the police. The writer said then: ‘I feel extremely sorry for these criminals. If they don’t stop robbing and performing shady dealings, they will be sure to be selected for the members of the Congress. It’s so hard to imagine how low they can fall.’

Some land speculator, who made a huge fortune deceiving too trustful American Indians, once with reckless negligence boasted in a company about the fact that he could afford buying expensive clothes. As an evidence, he showed everybody his tie and said: ‘Look here, this tie costs twenty-five dollars!’ Among other witnesses there was Mark Twain sitting nearby and listening to his little speech. He couldn’t but answer to this blabbing boaster: ‘That’s right, the circumstances in the United States are such that only those people who deserve a plain rope wear the most expensive ties!