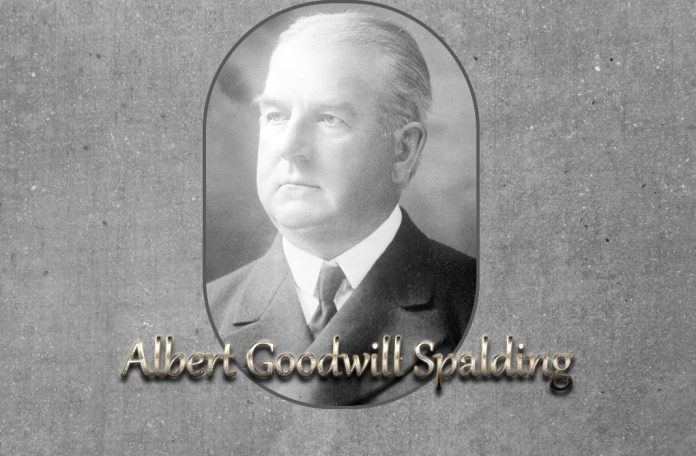 Albert Goodwill Spalding (September 2, 1849 – September 9, 1915) was an American pitcher, manager and executive in the early years of professional baseball, and the co-founder of A.G. Spalding sporting goods company.

He was elected to the Baseball Hall of Fame by the Veterans Committee in 1939, as one of the first inductees from the 19th century at that summer’s opening ceremonies. His nephew, also named Albert Spalding, was a renowned violinist.

In 1900 Spalding moved to San Diego and became a prominent member and supporter of the Theosophical community Lomaland, which was being developed on Point Loma by Katherine Tingley. He built an estate in the Sunset Cliffs area of Point Loma where he lived for the rest of his life. He joined with George Marston and other civic-minded businessmen to purchase the site of the original Presidio of San Diego, which they developed as a historic park and eventually donated to the city of San Diego. Epstein, Michael J., George White Marston: Baseball Player.

Having played baseball throughout his youth, Spalding first played competitively with the Rockford Pioneers, a youth team, which he joined in 1865. After pitching his team to a 26–2 victory over a local men’s amateur team (the Mercantiles), he was approached by another, the Forest Citys, for whom he played for two years. In the autumn of 1867 he accepted a $40 per week contract, nominally as a clerk, but really to play professionally for the Chicago Excelsiors, not an uncommon arrangement used to circumvent the rules of the time, which forbade the hiring of professional players. Following the formation of baseball’s first professional organization, the National Association of Professional Base Ball Players (which became known as the National Association, the Association, or NA) in 1871, Spalding joined the Boston Red Stockings (precursor club to the modern Atlanta Braves) and was highly successful; winning 206 games (and losing only 53) as a pitcher and batting .323 as a hitter.

William Hulbert, a principal owner of the Chicago White Stockings, did not like the loose organization of the National Association and the gambling element that influenced it, so he decided to create a new organization, which he dubbed the National League of Baseball Clubs. To aid him in this venture, Hulbert enlisted the help of Spalding. Playing to the pitcher’s desire to return to his Midwestern roots and challenging Spalding’s integrity, Hulbert convinced Spalding to sign a contract to play for the White Stockings (now known as the Chicago Cubs) in 1876. Spalding then coaxed teammates Deacon White, Ross Barnes and Cal McVey, as well as Philadelphia Athletics players Cap Anson and Bob Addy, to sign with Chicago. This was all done under complete secrecy during the playing season because players were all free agents in those days and they did not want their current club and especially the fans to know they were leaving to play elsewhere the next year. News of the signings by the Boston and Philadelphia players leaked to the press before the season ended, and all of them suffered verbal abuse and physical threats from the kranks, as baseball fans were called at the time, in Beantown and the City of Brotherly Love.

In the following months, Hulbert and Spalding organized the National League by enlisting the four major teams in the East and the three other top teams in what was then considered to be the West. Joining Chicago initially were the leading teams from Cincinnati, Louisville, and Indianapolis. The owners of these western clubs accompanied Hulbert and Spalding to New York where they secretly met with owners from New York, Philadelphia, Hartford, and Boston. Each signed the league’s constitution, and the National League was officially born.

Although the National Association held on for a few more seasons, it was no longer recognized as the premier organization for professional baseball. Gradually, it faded out of existence and was replaced by myriad minor leagues and associations around the country.