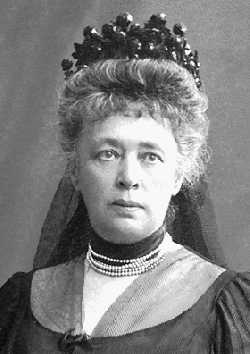 Though her personal contact with Alfred Nobel had been brief, she corresponded with him until his death in 1896, and it is believed that she was a major influence in his decision to include a peace prize among those prizes provided in his will, which she won in 1905.

She became engaged to engineer and novelist Arthur Gundaccar Freiherr von Suttner (who died on 10 December 1902), but his family opposed the match, and she answered an advertisement from Alfred Nobel in 1876 to become his secretary-housekeeper at his Paris residence. She only remained a week before returning to Vienna and secretly marrying Arthur on 12 June 1876.

Suttner became a leading figure in the peace movement with the publication of her novel, Die Waffen nieder! ("Lay Down Your Arms!") in 1889 and founded an Austrian pacifist organization in 1891. She gained international repute as editor of the international pacifist journal Die Waffen nieder!, named after her book, from 1892 to 1899. Her pacifism was influenced by the writings of Immanuel Kant, Henry Thomas Buckle, Herbert Spencer, Charles Darwin and Leo Tolstoy (Tolstoy praised Die Waffen nieder!). Bertha von Suttner by Irwin Adams. The World Encyclopedia of Peace.Edited by Ervin László, Linus Pauling and Jong Youl Yoo. Oxford : Pergamon, 1986. ISBN 0-08-032685-4, (vol. 3, pp. 201–4). Suttner was also a journalist, with one historian stating her work revealed her as "a most perceptive and adept political commentator".

Commemoration on coins and stamps