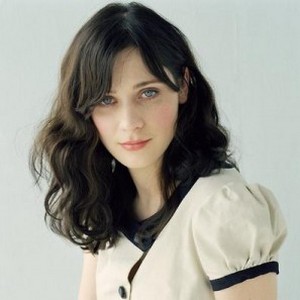 On the 17th of Junuary in 1980 Zooey Deschanel was born in Los Angeles, the city in an American state California. Zooey’s family was artistic. The girl’s father, Caleb Deschanel was a cameraman, whose films had been nominated for the American cinema academy awards and “Oscar” for several times. He worked with Francis Coppola and George Lucas in a production team “Zoetrope”. Her mother, Mary Jo Weir, was a cinema actress. The parents gave their daughter the name after Salinger’s story “Franny and Zooey”. Naturally, upbringing in such a family from the early childhood inspired Zooey to dream about performances on a professional stage, all the more her elder sister also became an actress.

Mixture of Irish and French blood gave Zooey Deshanel very unordinary and bright appearance, and her attractiveness was revealed in school. The girl studied with diligence and didn’t see any alternative to her child’s dream. When she got secondary education, she entered the School of Arts in Santa-Monica. During her studying Zooey played in a video of a group “Offspring” and in a documental film “Making the Video” of the MTV studio. In a rather compact schedule Zooey Deschanel found time to take part in a musical group – she played an unusual instrument, Hawaiian guitar. She also tried to write scripts, and her collaboration with Jackson Nash was especially successful. She created a script, called “Circus Girl” – a fantasy story, in which the girl wanted to play the main role.

At the age of nineteen Zooey Deschanel was called by her classmates in the school of arts and teachers a very interesting theatrical type. At the same time she played in her first small role – in a film “Mumford” (1999). A successful beginning demanded further development of the career, and Zooey was invited to play in the next film – a youth comedy “almost Famous” of a director Cameron Crow (2000). Although this film failed according to appraisal of box-office proceeds, it became practically cult among intellectual American youth. In fact, shootings were a success for Zooey – she was often invited to small, sometimes episodic roles in other films. The images, created by the actress, were remembered by viewers and positively marked by cinema critics.

But it was shootings in a film “Good girl” in 2002, in which she played with Jake Gyllenhaal and Jennifer Aniston, that finally helped Zooey Deschanel to become more popular in Hollywood. The film was nominated for several prestigious awards and won viewers’ love. In that year Zooey played noticeable roles in a film “abandon” and in a comedy “The New Guy”. Some time later she successfully entered the group of actors, who played in a thriller “Big trouble”.

And then there were a lot of suggestions from different Hollywood directors. In 2003 Zooey played in several films. Among them – “Whatever We Do”, “House Hunting” and “All the Real Girls”. But viewers liked Deschanel’s work in a family comedian film “Elf” most. This film was made by Jon Favrea. It was a touching and funny film, and that’s why it became very popular in American distribution.

During the preparation for “Elf” release the actress got to know that a famous director Hitcher announced audition for a film “The Hitchhiker’s Guide to the Galaxy”. Zooey read the book, which was a basis for this film’s plot, at the age of ten, and before the audition she reread it – probably, it helped her to get the main role. When the work on this film was in full swing, another film “Eulogy” was released (2004), in which Zooey played with such stars, as Hank Azaria and Jesse Bradford.

The second round of the Zooey Deschanel’s career was made in 2005 with the release of films “The Hitchhiker’s Guide to the Galaxy” and “Winter Passing”. These films were taken by viewers in different ways, but they were obvious victories of the young actress. In that year she also played in a popular comedian serial “Loosies”. In 2006 two film with Zooey’s participation were made – “Failure to Launch” and a criminal comedy “Live Free or Die” (directors Tom Dey and Gregg Kavet).