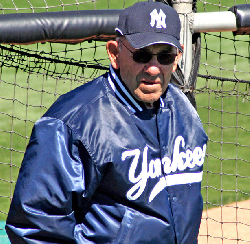 Lawrence Peter "Yogi" Berra (born May 12, 1925) is a former American Major League Baseball catcher, outfielder, and manager. He played almost his entire 19-year baseball career (1946–1965) for the New York Yankees. Berra is one of only four players to be named the Most Valuable Player of the American League three times and is one of seven managers to lead both American and National League teams to the World Series. As a player, coach, or manager, Berra appeared in 21 World Series. He was elected to the Baseball Hall of Fame in 1972.

Berra is widely regarded as one of the greatest catchers in baseball history. He was named to the Major League Baseball All-Century Team in a voting of fans in 1999. According to the win shares formula developed by sabermetrician Bill James, Berra is the greatest catcher of all time and the 52nd greatest non-pitching player in major-league history.

Berra, who quit school after the eighth grade, has a tendency toward clever quips. "It ain’t over ’til it’s over" is arguably his most famous example, often quoted. Simultaneously denying and confirming his reputation, Berra once stated, "I really didn’t say everything I said."

Berra and former teammate Phil Rizzuto were partners in a bowling alley venture in Clifton, New Jersey, originally called Rizzuto-Berra Lanes. The two eventually sold their stakes in the alley to new owners who changed its name to Astro Bowl before those owners sold the property to a developer, who closed the bowling alley in 1999 and converted it into retail space.

Berra remains involved in causes related to his Italian American heritage. A longtime supporter of the National Italian American Foundation (NIAF), Berra has helped fundraise for the Foundation, even signing baseballs at NIAF events for auction. In 1996, he received the NIAF Special Achievement Award for Sports at NIAF’s 21st Anniversary Gala.

Berra is a recipient of the Boy Scouts of America’s highest adult award, the Silver Buffalo Award.

Berra has frequently appeared in advertisements for Yoo-hoo, AFLAC, Entenmann’s, and Stove Top stuffing, among others, frequently demonstrating his famous "yogiisms." He is among the longest running commercial pitchmen in the U.S.; his television commercials span the early 1950s to the present day. Based on his style of speaking, Yogi was named "Wisest Fool of the Past 50 Years" by The Economist magazine in January 2005., The Economist, January 27, 2005.

Berra appears on the YES Network in Yogi and a Movie where he and Bob Lorenz comment on different movies intermittently as they play.

In 2009, Berra appeared in the documentary film "A Time for Champions" recounting his childhood memories of soccer in St. Louis.

In 1942, the St. Louis Cardinals spurned Berra in favor of his boyhood best friend, Joe Garagiola. On the surface, the Cardinals seemed to think Garagiola the superior prospect—but team president Branch Rickey actually had an ulterior motive: knowing he was soon to leave St. Louis to take over the operation of the Brooklyn Dodgers and more impressed with Berra than he let on, Rickey apparently planned to hold Berra off until he could sign him for the Dodgers. However, the Yankees signed Berra for the same $500 bonus the Cardinals offered Garagiola before Rickey could sign Berra to the Dodgers. The Yankees assigned Berra to the Norfolk Tars of the Class B Piedmont League, where his most memorable feat was driving in 23 runs in a doubleheader.http://www.funtrivia.com/en/Sports/Yogi-Berra-19655.html