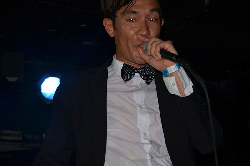 Vincent Francis Walker (born March 2, 1980), better known as Vince Walker, is an American multi-instrumentalist, best known as the lead singer of third-wave ska band Suburban Legends. He was formerly the lead trumpet player, and left sometime after the release of Rump Shaker, but returned to the band in September 2005 for the band’s appearance on the Jerry Lewis MDA Telethon, which happened to be lead singer Tim Maurer’s last performance. He replaced Maurer as the singer in an odd switching of roles, and continues with the band as frontman.

Walker was born in Seattle, Washington. Although he did not become lead singer of Suburban Legends until 2005, he previously sang on "Brian and Vince Experience (The Rap)" on Origin Edition (on which he was the lead guitarist), "Desperate" from Suburban Legends, "Powerful Game" on Rump Shaker, and "Rose Tint My World." Although he is not the only band member singing on these tracks, as "Brian and Vince Experience" and "Desperate" are performed with Brian Klemm, "Powerful Game" with Brian Klemm and Tim Maurer, and "Rose Tint My World" with Chris Batstone, Aaron Bertram, and Dallas Cook.

As of 2012, Walker, Klemm, drummer Matt Olson, and former Suburban Legends bassist Chris Maurer currently perform in a humorous blues rock side project called Personal Satisfaction. He is also a former member of Scott Klopfenstein’s side project, The Littlest Man Band. Vince had played trumpet, but left in 2004 to pursue an education and focus on Suburban Legends. Walker makes an appearance alongside bandmate Brian Klemm in one of Big D and the Kids Table’s several music videos for their cover of The Specials’ "Little Bitch."