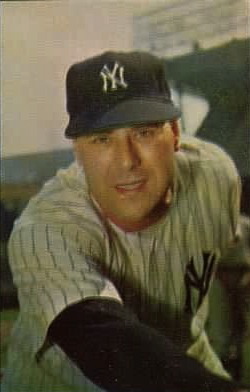 Victor John Angelo "Vic" Raschi (March 28, 1919 &ndash; October 14, 1988) was a Major League Baseball pitcher. He was one of the top pitchers for the New York Yankees in the late 1940s and early 1950s, forming (with Allie Reynolds and Eddie Lopat) the "Big Three" of the Yankees’ pitching staff. Later in his career, as a pitcher with the St. Louis Cardinals, he was responsible for allowing Hank Aaron’s first career home run.

Raschi was born in West Springfield, Massachusetts and went on to graduate from the College of William and Mary.

On February 24, 1954, Yankee fans were surprised to see Raschi traded to the St. Louis Cardinals. In the remaining two years of his career, with the Cardinals and Kansas City Athletics (who signed him as a free agent on April 28, 1955 when the Cardinals released him), Raschi won only 12 games while losing 16.

He kept his uniform number 17 on the Cardinals, but on the A’s took number 16.

Raschi retired to Conesus, New York, where he ran a liquor store and served as a baseball coach at Geneseo State College (now the State University of New York at Geneseo). In 1975, the college dedicated the Victor J. Raschi Baseball Field, which is now used as a softball field.Gittleman, Sol. , p. 204. McFarland, 2007. ISBN 0-7864-3055-9. Accessed March 2, 2011. Raschi died in Groveland, New York.