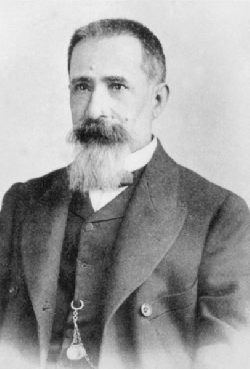 Ulisse Dini (14 November 1845 – 28 October 1918) was an Italian mathematician and politician, born in Pisa. He is known for his contribution to real analysis, partly collected in his book "Fondamenti per la teorica delle funzioni di variabili reali".See and .

Enrico Betti, teacher and academic advisor of Ulisse Dini Dini attended the Scuola Normale Superiore in order to become a teacher. One of his professors was Enrico Betti. In 1865, a scholarship enabled him to visit Paris, where he studied under Charles Hermite as well as Joseph Bertrand, and published several papers. In 1866, he was appointed to the University of Pisa, where he taught algebra and geodesy. In 1871, he succeeded Betti as professor for analysis and geometry. From 1888 until 1890, Dini was rettore"Rettore" is the Italian title for the chief executive, i.e. the rector, of a university. of the Pisa University, and of the Scuola Normale Superiore from 1908 until his death in 1918.

He was also active as a politician: in 1871 he was voted into the Pisa city council, and in 1880, he became a member of the Italian parliament.

Books by U. Dini

Monument to Ulisse Dini in Pisa

Dini worked in the field of mathematical analysis during a time when it was begun to be based on rigorous foundations. In addition to his books, he wrote about sixty papers.According to .

He proved the Dini criterion for the convergence of Fourier series and investigated the potential theory and differential geometry of surfaces, based on work by Eugenio Beltrami.

His work on the theory of real functions was also important in the development of the concept of the measure on a set.See .

The implicit function theorem is known in Italy as the Dini’s theorem.

One of his students was Luigi Bianchi.