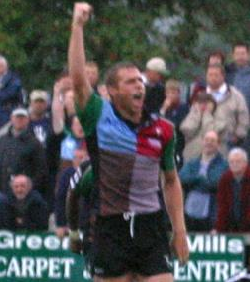 In 1995/96, Diprose captained England A to an unbeaten season, just 12 months after being voted the RFU Young Player of the Year.

Diprose has won ten full caps for England and has a reputation of being one of the most talented footballing forwards of his generation. He won his first cap against Argentina in 1997.

In 1998, Diprose captained England against after Matt Dawson was forced to withdraw through injury.

Diprose signed for Harlequins from Saracens in April 2001 and made his début in the pre-season friendly against Bedford at Goldington Road four months later (18 August 2001).

Diprose scored his first try for Quins in the Heineken Cup match away to Munster (5 January 2002) and for his efforts over the 2002/03 campaign, he was named ‘Supporters Player of the Season.’

Diprose retired at the end of the 2005/06 season and joined the coaching staff at Harlequins as the Academy Manager.