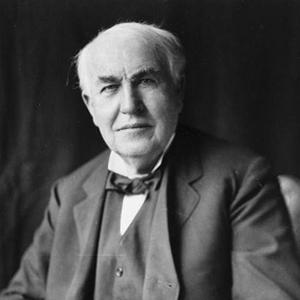 Thomas Edison was born in 1847 11 of February in Milan, Ohio. His parents owned a joiner’s shop. Thomas’ father was born and lived in Netherlands, and then moved to Canada. In Canada he met a local teacher Nancy Elliot and fell in love with her. Before Thomas was born they had two boys and two girls. Thomas was an active but sickly child.

At the age of seven his family moved to Port Huron. During the moving Thomas got scarlet fever and as a result got a progressing deafness. In new place in entered a church school but he didn’t show any talents and was considered as a difficult child. After six months of studying his mother had to take him from school. The reason was a Thomas’ conflict with a teacher which called the boy “a brainless dunce” after his statements. Mother believed that she could teach the son by herself and decided not to make him study at school. Instead of the traditional education she read to him “adult” books, for example, “School of Natural Philosophy” by Richard Parker and “Morse code”. Thomas liked these books a lot and soon he decided to build his own laboratory in the cellar.

“I managed to become an inventor because I didn’t attend school in childhood”. Thomas Edison

At the age of 12 Thomas started to work, he dealt in trains. He gave a part of the earned money to his mother. Hу spent spare time in libraries reading books.

In 1863 when he was 16 years old Thomas went to Stratford and got a telegraphist job. He worked at night and at the daytime he made experiments. That’s why during work he often fell asleep, this fact made him invent an automatic telegraph apparatus that sent messages every hour. But unfortunately he was guilty in two trains’ collision. Thomas had to leave Stratford. After this occasion he continued the career of a “wandering telegraphist”.

After reading Faraday’s works in 1868 Thomas understood what he wanted to do in life. And in this year he patented his first invention – electrical machine for votes calculation. In fact it wasn’t popular and Thomas made a conclusion never to invent something that doesn’t have demand.

In spite of the failure Thomas decided to renounce his only source of income and he left the newspaper where he worked as a journalist. In 69 year with the financial support of Boston businessman Baker-Wolsh he made an exchange telegraph. After that he started to engineer a telegraph with a dial plate with letters instead of numbers. Soon he was known in Boston business field as a talented inventor.

Edison never considered a patent as an end in itself, he wanted to earn money in the first place. He differed from other talented inventors of that time in business talent. When Edison saved a small capital he started to work on a project of making a ramified net of electricity supply. But this venture was a failure and Edison decided to go to New York, where he was taken notice by an engineer Franklin Pope. Pope suggested to found a joint company “Pope-Edison”. The company’s business went well and Edison could work on improving a telegraph machine. As a result he managed to sell it for 40 thousand dollars and reach a financial independence.

In 1870 Edison opened a laboratory on earned money in Newark. He employed 50 workmen, bought telegraph machines, recorders, automatic typewriters. His workshop was unique because Edison employed not only men but women. Soon his business was on the rise.

In 9 April 1871 Edison got news about his mother’s death. Edison often repeat he was a success thanks to his mother. After this awful bereavement Thomas tried to fulfill the emptiness in his soul, that’s why he started relationship with Mary Stillwell, a sixteen years old worker in his company. In 1971, 25 of December Edison organized a wedding ceremony in a protestant church. His family life was quiet and happy.

The second part of Edison’s life differs a lot from the first. The only thing was invariable – his passion to invent. Since 1899 till 1909 he invented kinetoscope, electric chair, iron-nickel accumulator. But then his creative energy started to run out. After 1908 year he never patented new inventions and began to occupy himself with managerial activity.

Thomas Edison died in 1931, October 18 at the age of 84. in the 21 of October, the day of his funeral, the United States of America organized a minute of silence and darkness. Practically in every house people turned off the light to honour a memory of an outstanding inventor. Before Edison died he told his wife: “If there is life after death, it’ good. If not, it’s good too. I’ve lived my life and have done the best I can…”.