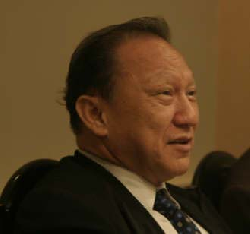 Stephen Tong () is a Chinese Indonesian Reformed pastor, evangelist, teacher and musician. He heads the Reformed Evangelical Church of Indonesia, which houses the megachurch Messiah Cathedral, and is one of the largest Christian evangelical church facilities in Southeast Asia. He has preached in countries around the world, and guest lectured at theological seminaries and schools. In 1992, pastor Philip Teng called him the "Billy Graham of the East" for his ministries in Southeast Asia.

Tong was born in 1940 in Xiamen, China, to Tong Pai Hu, a businessman whose family was highly regarded by the Qing government, and Tan Tjien Nio (also known as Dorcas Tanjowati), an Indonesian with Chinese ancestry. He is the sixth of eight children, only one of them was a girl.The Tong family consisted of seven sons: Tony, John, Peter, Caleb, Stephen, Joseph, and Solomon. They also had one daughter, Mary. Five of the sons, including Stephen, became Christian ministers. Pai Hu died when Stephen was 3; his family wealth had eroded during the years of Japanese imperialism. In 1949, the Tongs migrated to Surabaya, Indonesia, to escape persecution during the Chinese Revolution. Tong regarded his mother as a great example for his spiritual life: "When I was small, the first words I’d hear in the morning were those of my mother while she prayed. She prayed for each of us children by name, and asked God to guide us."

When Tong was 15 years old, he had strong beliefs in communism, which he called "Karl Marx’s dialectical materialism". He ascribed to Charles Darwin’s theory of evolution, and had a deep hatred towards Christianity, which he regarded as "the foolish religion which came from the devilish West and has illogical teachings".Dr. Stephen Tong & co, Serving My Times: Pictoral Story & Ministries, limited edition, p. 13

In January 1957, his mother brought him to a youth conference that was conducted by the Southeast Asia Bible Seminary (SABS) ( SAAT) in Malang. On January 9, the last day of the conference, Andrew Gih gave a revival sermon, and Tong became a Christian. He began to share the Gospel, and taught children in Christian schools. In 1960, he enrolled in SABS,Dr. Stephen Tong, In Step with The Holy Spirit, limited edition, p. 5 and later graduated with a Bachelor of Theology in 1964. He then joined SABS’s faculty, and taught theology and philosophy classes from 1964 to 1988.

Tong has written songs for his worship services and STEMI gospel rallies. The songs are listed with the year and location when they were first performed:Kidung Persekutuan Reformed Injili (songbook) (Jakarta: Sinode GRII, 2001)