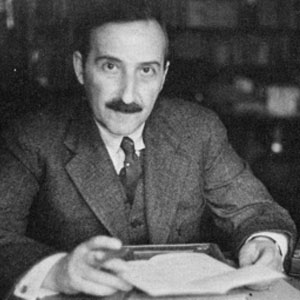 Stefan was born in Vienna, in family of Moritz Zweig, who was a prosperous Jewish merchant. Stefan’s father owned a textile manufacture. There was little known about Stefan’s childhood and adolescence. He said about that rather sparingly, emphasizing that the beginning of his life was absolutely the same as lives of other Jewish intellectuals of the borderline of the centuries. Having finished gymnasium in 1900, Zweig entered Vienna University. While studying, he published his first collection of poems in 1901, which was called “Silberne Saiten”, by his own means. The poems were composed under the influence of Hofmannsthal and also Rilke. Zweig even dared to send his collection of poems to Rilke. And the writer answered him, sending a book of his compositions. Their friendly relations started with that event. And the friendship remained until the day when Rilke died in 1926.

Having graduated from Vienna University and having got a doctor degree, Zweig left for London and then Paris (1905). Later he travelled to Italy and Spain (1906). Stefan Zweig also visited India, Indo-China, Cuba and Panama in 1912. The last years of the First World War Zweig spent in Switzerland (1917-1918), and after that he settled down near Salzburg.

During the First World War Zweig published his essay about Romain Rolland, calling him “the conscience of Europe”. He also composed essays, devoted to Maxim Gorky, Thomas Mann, Marcel Proust and Joseph Roth.

Stefan Zweig’s novels, such as “Amok” of 1922, “Confusion” of 1927, “Buchmendel” of 1929, Chess novel”, finished in 1941, and also his circle of historical novels “Sternstunden der Menschheit” of 1927, made him a worldwide popular author. His novels surprised with dramatics, interested with unusual stories and made people think about changeability of destiny. Zweig constantly convinced of the fact that a human heart is very defenseless, and that passion, sometimes, made people do evil deeds.

Zweig worked at his own model of novel, different from creations of universally recognized authors of short story genre. Events of most of his stories happened during travels, which were exciting, boring or even dangerous. Everything happening to Zweig’s characters took place on their way, during short stops or respites after roads. Dramas unfolded almost in hours, those moments very always the very important ones in characters’ lives, when personality tests took place and ability to sacrifice oneself was checked. The “heart” of every story by Zweig was a monologue, soliloquizeв by the hero in the heat of passion.

Zweig’s stories appeared to be a kind of summaries of big novels. But hardly had he tried to expand a single event in a spatial narration, when his novels turned into stretched verbose novels. That was why Zweig’s novels about contemporary life were not successful. He understood that and didn’t often use that genre. Those were “Ungeduld des Herzens” of 1938 and “Rauch der Verwandlung”, which was an unfinished novel, firstly published in German in 1982, forty years after the author was dead.

Sometimes Stefan Zweig wrote things which were on the border between literary art and documentaries. He created fascinating biographies of Magellan, Mary Stuart, Joseph Fouche and Balzac (1940).

It was appropriate to image a historical fact by power of creative imagination. So, an artist’s imagination started to work where it was not enough historical documents. But Stefan Zweig, on the contrary, always works with documents brilliantly, showing out psychological hidden motifs in any correspondence or memoirs of an eyewitness.