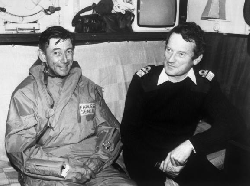 Admiral Sir John Forster "Sandy" Woodward GBE, KCB (born 1 May 1932) is a British Admiral who commanded the British Naval Force in the South Atlantic during the Falklands War.

Educated at Stubbington House School and the Royal Naval College Dartmouth, Woodward joined the Royal Navy in 1946.Debrett’s People of Today 1994 He became a submariner in 1954. In 1960 he passed the Royal Navy’s rigorous Submarine Command Course known as The Perisher, and received his first command, the T Class submarine HMS Tireless. He then commanded HMS Grampus before becoming the second in command of the nuclear fleet submarine HMS Valiant. In 1967, he was promoted to Commander and became the Instructor (known as Teacher) of the The Perisher Course. He took command of HMS Warspite in December 1969. He was promoted to the rank of Captain in 1972. In 1974, he became Captain of Submarine Training and in 1976 he took command of HMS Sheffield.

He became Head of Naval Plans in the Ministry of Defence in 1978. In July 1981, he was promoted to Rear Admiral and appointed as Flag Officer First Flotilla.

In 1982, he commanded the Hermes aircraft carrier group, Task Force 317.8, in the Falklands War under the Commander-in-Chief Admiral Sir John Fieldhouse. (The task force containing the amphibious ships which launched the actual invasion TF 317.0 was commanded by Commodore Michael Clapp, with Task Force 317.1 being the landing force itself.) For his efforts during the war Woodward was knighted. His book One Hundred Days, co-authored by Patrick Robinson, describing his Falklands experiences, is a candid account of the pressures of high command in wartime and the impact on the individual commander.

In 1983, Woodward was appointed Flag Officer Submarines and NATO Commander Submarines Eastern Atlantic. In 1984, he was promoted to Vice Admiral, and in 1985 he was Deputy Chief of the Defence Staff (Commitments). Before retirement in 1989 he also served, from 1987, as Commander-in-Chief Naval Home Command and Flag Aide-de-Camp to the Queen.