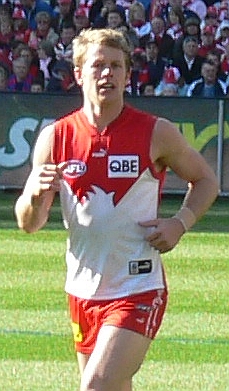 Ryan O’Keefe (born 24 January 1981) is an Australian Football League player with the Sydney Swans, and part of the Swans’ 2005 and 2012 premiership-winning sides.

O’Keefe was a member of the 2006 All-Australian side and is one of Sydney’s key forwards. He is known for his superb fitness and running ability, as well as his strong marking overhead. He is among the very best in the AFL in terms of ground coverage. It is these abilities that have made up for his slight lack of height and speed, which were obstacles early in his career. He is also a terrific left-foot kick, which has served him well since he transformed from a defender to a forward early in his career with the Swans.

O’Keefe backed up his All-Australian form of 2006 with a memorable performance through the 07 season, once again finishing second in the votes for the Bob Skilton medal behind Brett Kirk who also was one of shining lights for the Swans.

In January 2008 O’Keefe married Tara Duggan and together they have a son Levi born September 2009 and a second child born in April 2012.

He was nominated for the Cleo Bachelor of the Year in 2005 and once dated Mary, Crown Princess of Denmark.

In 2006, he made All-Australian selection, and was once again selected to represent Australia in the International Rules series. He had a highly successful series, scoring more points than any other player. He was awarded the Jim Stynes medal for the best Australian player in the series.

O’Keefe played his 100th AFL game in Round 7 against . In what was also Paul Williams’ 300th game, Sydney defeated Richmond by 118 points.

He came equal second in the running for the Bob Skilton Medal, which is annually awarded to the Best and Fairest player at the Sydney Swans, to one of the three Co-Captains, Brett Kirk.

After a strong start to the season, increased pressure was placed on O’Keefe following the suspension of troubled forward target Barry Hall. O’Keefe also played for the Victorian team for the one-off match in May, but instead of wearing his normal #5, he wore #1.

Following the 2008 Grand Final, O’Keefe signalled his intentions to continue his career elsewhere, specifically in Victoria – his place of birth, after knocking back an initial three-year contract offer by the Swans. After a suitable swap was not able to be arranged during the AFL’s "trade week," however, O’Keefe decided against entering a pre-season draft where three teams outside Victoria had picks before any other Victorian teams. He then signed a 4 year contract with the Sydney Swans.

O’Keefe attracted press criticism after making a slow start to the 2009 season, but after moving into a midfield role he performed strongly through the majority of the 2009 season, and was rewarded by being selected as the Bob Skilton medallist for the season.

After a very impressive first month of play in 2010, O’Keefe suffered a concussion against the Brisbane Lions at the SCG which somewhat stalled his season. He also sustained a groin injury later in the year which severely hampered his ability to cover the ground with his elite endurance. Accordingly, he was prevented from spending whole games in the midfield and towards the end of the year he spent more and more time in the forward line. O’Keefe did manage to play some impressive football however, particularly against Hawthorn at the SCG when he blanketed the dangerous Luke Hodge while kicking 4 goals himself (he was awarded 3 Brownlow votes for his game). Since the end of the season, O’Keefe has had groin surgery and will be able to participate in pre-season training.

Having recovered from his debilitating groin injury in 2010, O’Keefe returned to very strong and consistent form in 2011. He spent most of his time in the midfield, though did play some meaningful roles up forward late in the year, kicking 4 goals in the Elimination Final against St.Kilda at Etihad Stadium in a BOG performance and then kicking 3 the next week against Hawthorn in the Swans’ Semi Final Loss at the MCG. O’Keefe finished 4th in the Bob Skilton Medal count for season 2011.