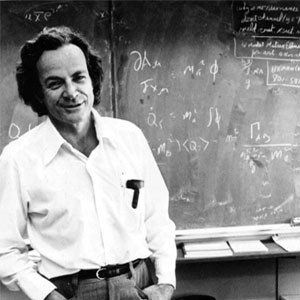 Except the Nobel Prize, Richard Feynman was also given Albert Einstein Prize of Louis and Rose Strauss’s memorial fund in 1954, Ernest Orlando Laurence’s Prize of committee of atomic energy of the United States in 1962 and Niels Bohr’s international golden coin of Danish society of civil engineers, electricians and mechanical engineers in 1973.

Feynman was a member of American Physics Society, Brazil Academy of science and London Royal society. He was chosen to be a member of National Academy of Science of the United States, but later he retired.

Besides theoretical physics, Feynman also made research in biology field.

Feynman got his first job at the age of thirteen, making money by repairing radio receivers. He was popular among neighbors for two reasons. First of all he repaired radio receivers quickly and with quality. And the second reason was that Richard tried to find the reason of disrepair using his logic, by symptoms, before he started to take devices into pieces. Neighbors admired the boy who thought before starting repairing.

First marriage and working in Los-Angeles

Richard troubleshooting finished his four-year education at Massachusetts Institute of Technology, physics faculty. Soon after that he continued his education at Princeton University.

When the Second World War started, Feynman, being a graduate student of Princeton, tried to go to the front as a volunteer. But everything he could be offered was a position in the local induction station. Having thought a little Richard refused, hoping that there could be a better place in army for a physicist. Soon he took part in developing the last, before appearing of computers, mechanical calculating machines, which were used for calculating artillery trajectory.

While he was working at his qualifying work for a degree of doctor of philosophy in physics, Feynmann married Arline Greenbaum, the girl he had been in love since thirteen years. They were waiting since the betrothal when they were nineteen. Unfortunately, by the day of marriage Arline was doomed to die from tuberculosis.

Feynman’s parents were against of their marriage, but Richard did his own way. The ceremony of wedding was carried out on their way to the train station, because they were going to Los-Alamos; the witnesses were a ledger clerk and a bookkeeper, serving at Richmond mayor’s office; there were no relatives of the couple present at the ceremony. After the ceremony was finished and that was the time to kiss the bride, Richard, remembering about her disease, kissed Arline chastely on her cheek.

In Los-Alamos, Richard took part in developing an atomic bomb at Manhattan project. By the time Feynman joined the project, he was still studying at Princeton. The idea to join the project was given by Robert Wilson, who was a famous physicist. In the beginning Feynman was not eager to start working for the project, but then he thought about what might happen if Nazi Germany was the first to create an atomic bomb. So, Feynman joined the project. While Richard worked in Los-Alamos, his wife, Arline, was in hospital in Albuquerque, not far from Los-Alamos. Every weekend Richard stayed with her.

While working at atomic bomb, Feynman developed good skills of safes burglar. He persuasively proved that there were not enough security arrangements, stealing information about developing atomic bomb from safes of people of the staff. He managed to steal absolutely everything, beginning with technologies of uranium enrichment and finishing with the manual of bomb installation. Anyway he needed those documents for his work. In his autobiographic book “Surely You’re Joking, Mr. Feynman!” that he started to open safes just because of curiosity (that was the same for other activities in his life), but after a serious research of the topic, he found out a few tricks, which he used for opening safes in the laboratory. He also mentioned that he did it with the help of good luck and the combination with those trick brought him reputation of a burglar in the group.