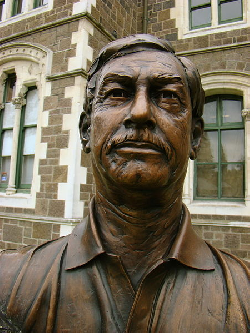 Sir Richard John Hadlee, MBE (born 3 July 1951) is a former New Zealand cricketer, regarded as one of the greatest fast bowlers and all-rounders in cricketing history.

Hadlee was appointed MBE in 1980 and knighted in 1990 for services to cricket. He is a former chairman of the New Zealand board of selectors. In December 2002, he was chosen by Wisden as the second greatest Test bowler of all time. In March 2009, Hadlee was commemorated as one of the Twelve Local Heroes, and a bronze bust of him was unveiled outside the Christchurch Arts Centre.

On 3 April 2009, Sir Richard Hadlee was inducted into the ICC Cricket Hall of Fame. Richard is the most prominent member of the Hadlee cricket playing family.

Richard is the son of Walter Hadlee, and the brother of Dayle and Barry Hadlee. His former wife Karen also played international cricket for New Zealand. He was born on 3 July 1951 at St Albans, Christchurch

Due to the enormous stress Hadlee was under, in 1983 he experienced mental health problems. This was due to his international cricket career, many public speaking engagements (up to 12 a week) and his responsibilities to the New Zealand Cricket Council coaching committee (Hadlee was required to do three weeks of fast bowling tuition).Hadlee, R. & Francis, T. (1985). Richard Hadlee At The Double: the story of cricket’s pacemaker. New Zealand: Whitcoulls, ISBN 0091608708.

With the close support of his family, Hadlee cancelled all his appointments for two weeks, and took a holiday to Rarotonga, where he ran into his great cricketing rival Dennis Lillee. The two talked about the pressures of international cricket, and in particular, carrying the hopes of their respective nations. After ten days of peace and quiet, Hadlee returned to New Zealand and had sessions with motivational expert Grahame Felton. After a week with Felton, Hadlee felt he was making great progress. Hadlee returned to domestic cricket, scoring 90 runs and taking four wickets in his first match back. After this positive result he told the cricket council that he would be available for the up-coming England series, in which he did well. In the 4 innings Hadlee scored 144 runs with a high score of 99. Hadlee bowled 232 overs, with 65 maidens and took 21 wickets.

Hadlee was an aggressive left-handed middle-order batsman. Though his record was not as strong against top international bowlers, he was effective at punishing lesser attacks. He finished his career scoring 15 Test fifties and two Test centuries, and so much so that for Nottinghamshire in 1984, 1986 and 1987 he averaged over 50 (only W.G. Grace and George Herbert Hirst have come comparably close to heading both batting and bowling averages in a season).

Hadlee was a right-arm pace bowler. Initially extremely fast, as the years progressed he gained accuracy, movement off the wicket and in the air, and a reputation that probably gained him quite a few wickets on its own. Perhaps his most potent delivery was the often unplayable outswinger, which became his main weapon in the latter stages of his career.

Hadlee modelled his bowling action on the great Australian fast bowler Dennis Lillee, whom he regarded as his bowling role model. It was common for Hadlee to think about how to dismiss batsmen by wondering ‘what would Lillee do?’.