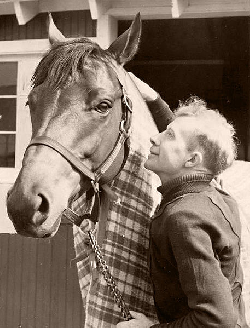 John "Red" M. Pollard (October 27, 1909 &ndash; March 7, 1981) was a Canadian thoroughbred horse racing jockey. A founding member of the Jockeys’ Guild in 1940, Pollard rode at racetracks in the United States and is best known for riding Seabiscuit.

Red Pollard stood 5 feet 6&nbsp;inches, which is considered tall for a jockey (Eddie Arcaro, for example, stood 5 feet 3&nbsp;inches). He had also been blinded in his right eye early in his career, by a stray rock kicked up by another horse during a training ride on a crowded track; it hit his skull and damaged the vision center of his brain. At that time, few jockeys actually wore helmets to prevent just such accidents.

In 1933, he rode in Ontario at Woodbine and Fort Erie Racetracks. Down and out in Detroit in 1936, he was hired by Tom Smith for Charles S. Howard to ride Seabiscuit. The team’s first stakes win came in the Governor’s Handicap. They traveled west while winning races along the way. Seabiscuit won numerous important races, including the 1937 Brooklyn Handicap at Old Aqueduct Racetrack in New York, and the 1937 Massachusetts Handicap at Suffolk Downs in Boston, but was most famously known for losing the Santa Anita handicap of 1937 by a nose. Eventually, the pairing was considered by most as the best race horse and jockey in the USA at that time. In 1940 he finally won the Santa Anita Handicap at Santa Anita Park in Arcadia, California. It was Seabiscuit’s last race. The horse was 7 years old. All in all, Red rode the Biscuit 30 times with 18 wins – all of them stakes or handicaps. The horse he rode was one of the greatest racehorses in history. Seabiscuit was fondly called "The Biscuit" and was spoiled by Howard’s wife, Marcela Howard. Red continued to ride into the 1950s, mostly in New England. Eventually, he became a valet at Narragansett Park in Rhode Island.Hillenbrand, Laura (2001), "Seabiscuit: An American Legend."

Pollard was also famous for the severe injuries that he suffered.

In February 1938, Pollard suffered a terrible fall while racing on Fair Knightess, another horse owned by Howard. His sternum, or chest was crushed by the weight of the falling animal, and his ribs and arm were broken. He had extensive surgery, and almost did not survive. He recovered, and was working again by the July of the same year, he then suffered a compound fracture in his leg from a runaway horse. While recuperating, Red fell in love with his nurse, Agnes Conlon. They were married the following year and had two children: Norah and John. While walking the hills of Howard’s estate, he broke his leg again when he stepped into a hole. Howard, who thought of Pollard as a son, paid for his hospital stay again.

In 1982, Pollard was inducted into the Canadian Horse Racing Hall of Fame.

Pollard died on March 7, 1981 in Pawtucket, Rhode Island, where he had bought a house and settled after the Big Cap win of 1940. He is buried at Notre Dame Cemetery, a mile north of Narragansett Park, with his wife.

Red Pollard was the grandson of immigrant Michael Pollard, who came from Ireland in 1850. He was born there around 1834. Upon arriving in the United States, Michael made his first home in New Jersey. About 1855, he moved to Mercer County, Illinois. In 1861, he served in A Co. 9th Illinois Cavalry. In 1863, he married Bridget Moloney in Rock Island, Illinois. She was also an Irish immigrant. He moved to Grundy Center, Iowa, in 1870 and stayed there until his death in 1913.

His son John A. Pollard was born there in 1875. John immigrated to Edmonton, Alberta, in 1898. After the turn of the century, he founded the Pollard Bros Brickyard with his brother Joseph. His son, John M. Pollard, was born there in 1909.