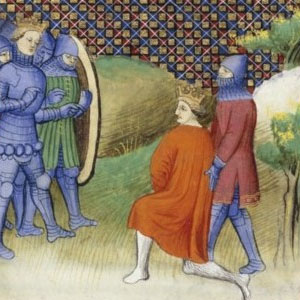 Asserting his right for the throne, Peter of Castile exterminated his enemies cruelly, that was why he was called Cruel. When his opponents were eliminated and there was nothing to threaten his position, peter of Castile got another name, el Justiciero.

Youth of the king

Peter of Castile was born on 30 August 1334 in Burgos. His father Alfonso XI was very keen on his lover Leonora, who also gave him nine children, that he had no time to bring up his son, completely intrusting it to his wife Marie of Portugal. As the result in his young years Peter of Castile was under strong influence of his mother and her favorite Huan Alfonso de Albukerke, as he lived together with her in Seville stronghold.

The beginning of ruling

On 26 March 1350 Alfonso XI died from plague at the siege of Gibraltar. Peter came to the throne at the age of sixteen. The beginning of his ruling was darkened with conflicts between infants of Aragon and Alfonso’s sons born out of wedlock, who had wealth and high titles. For example, one of those sons, Enrique , was the count of Trastamara, and other son, Fadrique, was the head of St. Jacob order.

The reputation of a cruel ruler was obtained, when Peter of Castile, one year later after he was crowned, arrested his father’s lover Leonore at the instance of his mother who wanted to revenge. Peter of Castile ordered to execute Leonore in Talavera de la Reine.

In his youth, Peter was betrothed to Joanna, who was a daughter of Eduard III, the king of England. But Joanna died from plague at her way to Castile on 2 September 1348.

Having become the king, Peter took a fancy to Maria de Padilla, who was a daughter of a Castile grandee. Huan Albuquerque helped the lovers, meaning to strengthen his influence on the king. But later Huan Albuquerque and Peter’s mother insisted on a political marriage. On 3 June peter married Blanche of Bourbon, who was a daughter of French duke Piere of Bourbon. The king didn’t hide his hostile attitude to his new wife. Three days after their marriage, Peter ordered to shut her up under constant supervision in stronghold Arevalo. So, Peter left his palace in Valladolid and came back to his lover Maria in Montalvan castle.

The reasons of the riot in Toledo

Part of the king’s circle, mostly Alfonso XI’s sons born out of wedlock, supported the king, considering that Peter would be angry with Albuquerque for the imposed marriage. But some grandees were offended with such attitude to the new queen. They left the court, making the sign of disapproval. Huan, who put himself against of the king and powerful relatives of Marie de Padilla, escaped to a small village Carvahales close to the border of Portugal.

Learning about the moved away grandees and the escape of Huan Albuquerque, the king became furious. He ordered to get rid of the rebellious grandees, including Huan de Prado, who was Albuquerque’s supporter and the head of an order. He was decoyed with a ruse to Almagro castle, where he was tortured until he agreed to decline his title. The new head of the order became Diego Garcia de Padilla, a brother of Marie de Padilla, who killed Huan de Prada with his own hands. The second brother of Maria was given the position of the head of St. Jacob order. The position was taken from Leonora’s son Fadrique.

By that time Peter’s addiction to Maria de Padilla drew Pope Innocent VI’s anger. He threatened the lovers with excommunication if they refuse to break their relation. Under the threats of Innocent VI Maria left Peter and went to nunnery.

The hasty actions of Peter caused conflicts between Castile grandees, spoiled relations with France and provoked the riot in Toledo.

Peter of Castile was killed with his brother Enrique.

Peter of castile also had a son with Juana de Castro: