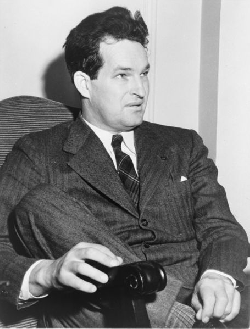 Paul Eliot Green (March 17, 1894 – May 4, 1981) was an American playwright best known for his depictions of life in North Carolina during the first decades of the twentieth century. He received the Pulitzer Prize for Drama for his 1927 play, In Abraham’s Bosom.

Green’s output was not only confined to plays. He penned the screenplay for the 1932 film The Cabin in the Cotton and also wrote extensively on the subject of his beloved North Carolina. He helped Richard Wright adapt his novel Native Son to the stage in 1940. He also was a founder of the North Carolina Symphony Orchestra and the Institute for Outdoor Drama. He served UNESCO travelling around the world to lecture on human rights and drama. Green served as a professor of drama at UNC until his death in 1981.

Born in Buies Creek, North Carolina, in Harnett County near Lillington, Green was educated at Buies Creek Academy (known today as Campbell University). He went on to study at the University of North Carolina at Chapel Hill where he joined The Dialectic and Philanthropic Societies and the Carolina Playmakers. Green also studied at Cornell University.

Green first attracted attention with his 1925 one-act play The No ‘Count Boy which was produced by the New York Theatre Club. The next year his full-length play In Abraham’s Bosom was produced by the Provincetown Players and received the Pulitzer Prize for Drama. The play was considered remarkable for its depiction of African Americans in the South. Its hero, a man of mixed racial ancestry, finds his idealistic attempts to better the lives of the African Americans around him doomed to failure. With this success, Green quickly was recognized as one of the leading regional voices in the American theatre. His plays were often compared with the folk plays of Irish playwright John Millington Synge.

But Green had already begun to move away from the realistic style of his early work. In 1928–29 he traveled to Europe on a Guggenheim Fellowship and was impressed by the non-realistic productions that he saw there. He began to experiment with expressionism and the Epic theatre of Bertolt Brecht and Erwin Piscator. In the 1930s Green largely abandoned the New York theatre, whose commercialism he found distasteful. His experiments in non-realistic drama, Tread the Green Grass (1932) and Shroud My Body Down (1934) both premiered in Chapel Hill, and never were professionally produced in New York.

During the summer of 1936, Green, Cheryl Crawford, Kurt Weill and Weill’s wife Lotte Lenya rented an old house in Nichols, Connecticut near the summer rehearsal headquarters of the Group Theatre at Pine Brook Country Club. Green returned to the Group Theatre to write his pacifist musical play, Johnny Johnson, with a score by Kurt Weill. In it, Green experimented with genre, writing the first act as a comedy, the second as a tragedy, and the third as a satire. It was also during this time that Lotte Lenya had her first American love affair with Green.Speak Low (when you speak of love): The Letters of Kurt Weill and Lotte LenyaA Southern Life: Letters of Paul Green, 1916–1981, p. 258

The production encountered problems of style early on: set designer Donald Oenslager designed the first act in poetic realism, the second in expressionism, and the final act in an extremely distorted style, director Lee Strasberg wanted to stage it realistically, and others in the company wanted it to be staged expressionistically throughout. Reviews ranged from the enthusiastic to the dismissive, and it ran for sixty-eight performances.

Green created a new dramatic form that he called symphonic drama. Inspired by historical events, it incorporated music and pageantry, usually for outdoor performance. His first experiment in this form was Roll Sweet Chariot (1934), which ran for a scant four performances on Broadway. Much more warmly received was the first and most famous of his outdoor symphonic dramas, The Lost Colony (1937) with music by Lamar Stringfield, which is still played during the summer in an outdoor theater at Fort Raleigh National Historic Site near Manteo, North Carolina. The Lost Colony is the oldest outdoor historical drama in the United States. Among Green’s other outdoor symphonic dramas are Faith of Our Fathers, Wilderness Road, The Lone Star, The Common Glory, The Founders, Trumpet in the Land, which tells the story of the American massacre of Native American Moravians in Gnadenhutten, Ohio, during the American Revolution, Cross and Sword, the state play of Florida, and The Stephen Foster Story which continues to be played each summer in Bardstown, Kentucky. The little one-room house where he did much of his writing can be seen at the North Carolina Botanical Garden in Chapel Hill, North Carolina.