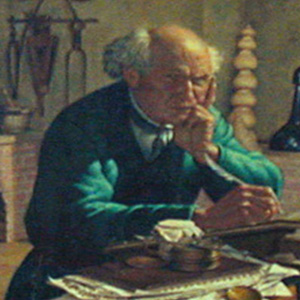 Paracelsus meant “like Celsius” in Latin. Hohenheim called himself Aureolus (Golden), thinking highly of himself and his skills.

Paracelsus was born in a family of a doctor, who was a descendant of an age-old noble family which had grown poor. The boy’s mother worked as a nurse in an abbey. The boy looked rather feeble – he had banding thin legs and big head. Paracelsus got fine education in medicine and philosophy at home. By the age of 16 he was acquainted with the basics of surgery and therapeutics, moreover he was good at basic alchemy. Being a 16-years boy, Paracelsus left his home for good and made his way to the University of Basel. After that he came to Wurzburg and became the student of abbot Iohannes Trithemius, one of the greatest adherents of wizardy, alchemy and astrology. Paracelsus studied ancient secret doctrines (cabbalism). Paracelsus finished his University education and got a degree of doctor in medicine in Ferrara.

Since 1517 Paracelsus traveled a lot (he was probably the predecessor or founder of secret societies, which appeared in the 17th century in Europe), he also visited different universities of Europe, worked as a doctor during war campaign, came to Imperial lands, visited France, England, Scotland, Spain, Portugal, Scandinavian countries, Poland, Lithuania, Prussia, Hungary, Romania, Wallachia, Apennine peninsula countries. There were rumors that he had also been to North Africa, Palestine, Constantinople, and Muscovy and was hold captive by Tatar.

As Van Gelmont mentioned, Paracelsus arrived in Constantinople in 1512 and got there the philosopher’s stone. The adept who gave Paracelsus the stone, as it was mentioned in the book “Aureum vellus” (Golden Fleece in translation), published in Rorschach in 1598, a certain Solomon Trismozin or Pfeiffer, fellow-citizen to Paracelsus. They also said that Trismozin had all-purpose panacea and by the end of the 17th century he was still alive, one French Traveller saw him.

Paracelsus travelled along Danude and visited Italy, where he worked as a military surgeon at the Imperial Army and took part in many military campaigns by that time. While travelling he gathered a lot of useful information, not only from doctors, surgeons and alchemists, but also communicating with executioners, barbers, herdsman, Jew, Gipsy, midwife and foretellers. He got knowledge from the great and from the low, from scientists and humble people. One could meet him with herdsmen and tramps, on the roads and at inns. That caused cruel reproach and abuses from his ill-wishers. Having wandered for ten years, practicing his knowledge, teaching and learning alchemy and wizardry, as it was usual for those times, at the age of 32, Paracelsus came back to Germany, where he became famous very soon for a few cases of amazing healing.

In 1526 he got burger privilege in Strasbourg, and then in 1527, with the help of a local publisher, Paracelsus became the city doctor in Basel. In 1527 with recommendations, the city council made his a professor of physics, medicine and surgery; in addition to that he got a high salary. At Basel University, Paracelsus lectured in German and that was a kind of challenge, as the University tradition demanded lecturing in Latin. Paracelsus lectures, unlike his colleagues’ lectures, were not just the simple review of Galenus’s, Hippocrates’s and Avicenna’s teaching. By that time the explanation of those teachings became the main activity of the professors of medicine. Paracelsus’s teaching was really his own teaching, and he taught taking into account no other opinion. That brought him applause of students and indignation of his orthodox colleagues, as he broke the tradition of teaching only the doctrines that could be supported with well-safe settled theories and generally accepted testimonies, no matter if it was reasonable or not. In 1528, because of the conflict with city officials, Paracelsus left for Colmar. He was deprived of his degree in the academy for almost ten years.