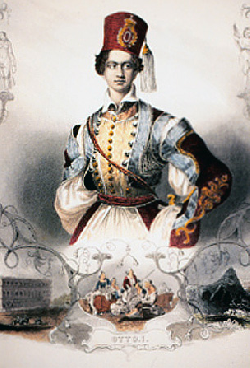 Otto, also spelled Othon ( Óthon, Vasiléfs tis Elládos; 1 June 1815&nbsp;– 26 July 1867), was a royal prince of Bavaria who became the first modern King of Greece in 1832 under the Convention of London. He reigned until his deposition in 1862.

The second son of the philhellene King Ludwig I of Bavaria, Otto ascended the newly created throne of Greece while still a minor. His government was initially run by a three-man regency council made up of Bavarian court officials. Upon reaching his majority, Otto removed the regents when they proved unpopular with the people and he ruled as an absolute monarch. Eventually his subjects’ demands for a Constitution proved overwhelming and in the face of an armed but peaceful insurrection, Otto granted a Constitution in 1843.

Throughout his reign, Otto faced political challenges concerning Greece’s financial weakness and the role of the government in the affairs of the Church. The politics of Greece of this era was based on affiliations with the three Great Powers, and Otto’s ability to maintain the support of the powers was key to his remaining in power. To remain strong, Otto had to play the interests of each of the Great Powers’ Greek adherents against the others, while not aggravating the Great Powers. When Greece was blockaded by the (British) Royal Navy in 1850 and again in 1853, to stop Greece from attacking the Ottoman Empire during the Crimean War, Otto’s standing amongst Greeks suffered. As a result, there was an assassination attempt on the Queen and finally, in 1862, Otto was deposed while in the countryside. He died in exile in Bavaria in 1867.

It is well known that Otto was a great admirer of the rural Sarakatsani, a nomadic group of Greek mountain shepherds thought by some scholars to be descended from the Dorians. It is believed that at an early age he fathered an illegitimate child in the Sarakatsani clan named "Tangas". This child was named Manoli Tangas, was brought to Athens and remained there after Otto’s 1862 departure, living as a merchant trader with children of his own. The descendants of Manoli still reside in Athens today.

However, since Otto had no legitimate issue, he chose his brother as Crown Prince of Greece. It is often suggested that following his death, Prince Adalbert became the heir presumptive to the throne of Greece. In fact, rights to the Greek succession were passed onto his other older brother Luitpold, who technically succeeded to the Greek throne in 1867.

Although King Otto tried to function as an absolute monarch, as Thomas Gallant writes, he "was neither ruthless enough to be feared, nor compassionate enough to be loved, nor competent enough to be respected."Gallant, Thomas W., Modern Greece (Oxford University Press, 2003) ISBN 0-340-76336-1

By 1843, public dissatisfaction with him had reached crisis proportions and there were demands for a Constitution. Initially Otto refused to grant a Constitution, but as soon as Bavarian troops were withdrawn from the kingdom, a popular revolt was launched.

On 3 September 1843, the infantry led by Colonel Dimitris Kallergis and the respected Revolutionary captain and former President of the Athens City Council General Yiannis Makriyiannis assembled in the Square in front of the Palace in Athens.

Eventually joined by much of the population of the small capital, the rebellion refused to disperse until the King agreed to grant a Constitution, which would require that there be Greeks in the Council, that he convene a permanent National Assembly and that Otto personally thank the leaders of the uprising.

Left with little recourse, now that his German troops were gone, King Otto gave in to the pressure and agreed to the demands of the crowd over the objections of his opinionated Queen. This square was renamed Constitution Square (Πλατεία Συντάγματος) to commemorate (through to the present) the events of September 1843—and to feature many later tumultous events of Greek history.Tompkinson, John L., Athens: The City (Anagnosis Books, 1996) ISBN 960-87186-0-0 Now for the first time, the king had Greeks in his Council and the French party, the English Party and the Russian Party (according to which of the Great Powers’ culture they most esteemed) vied for rank and power.