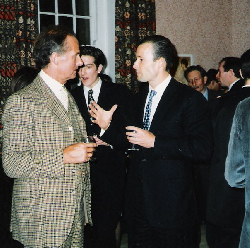 Count Nikolai Dmitrievich Tolstoy-Miloslavsky ( born 23 June 1935) is an Anglo-Russian historian and author who writes under the name Nikolai Tolstoy. A member of the prominent Tolstoy family, he is of part Russian descent and is the stepson of the author Patrick O’Brian. He holds dual British and Russian citizenships. He is also a former parliamentary candidate of the United Kingdom Independence Party.

Tolstoy’s great-grandfather, Pavel Tolstoy-Miloslavsky, was Chamberlain to the last reigning Tsar, Nicholas II of Russia, who had declared his intention of creating him a Count for his services, but this was deferred due to the growing crisis in Russia during the First World War. When Grand Duke Kiril succeeded to the imperial inheritance and rights, he granted Pavel Tolstoy-Miloslavsky the title, an elevation which was approved by the Dowager Empress Maria Fyodorovna and by Nicholas II’s sisters Xenia and Olga.

Tolstoy’s father, Count Dimitri Tolstoy, escaped from Russia in 1920 and settled in England. He entered the legal profession, was called to the bar and was appointed a Queen’s Counsel.

Tolstoy himself is married and has four children,

As historian of the forced repatriation of Soviet citizens and others during and after World War II, he was called by the defence as an expert witness at the trial of John Demjanjuk in Israel. In a letter to the Daily Telegraph (21 April 1988), Tolstoy said the trial and the court’s procedures struck "at the most vital principles of natural justice". He condemned the use of especially bussed-in audiences, who were repeatedly permitted by Judge Levin to boo and hiss at appropriate moments. He called Levin’s conduct "an appalling travesty of every principle of equity", and said that it was "a show trial in every sense of the word", even being conducted in a theatre. When eventually the United States Justice Department was found to have collaborated with the Soviet authorities in suppressing evidence that he had been falsely identified, the case against Demjanjuk was dismissed.Willem A. Wagenaar, "Identifying Ivan: A Case Study in Legal Psychology" ISBN 0-7450-0396-6; Yoram Sheftel, "The Demjanjuk Affair: The Rise and Fall of a Show-Trial" ISBN 0-575-05795-5; Hans Peter Rullmann, "Der Fall Demjanjuk: Unschuldiger oder Massenmörder?" ISBN 3-925848-02-9; Jim McDonald, "John Demjanjuk: The Real Story" ISBN 0-915597-79-9

The Foreign Affairs Committee of the Conservative Monday Club hosted a major dinner for Tolstoy at the Charing Cross Hotel in London on 26 October 1988. It was an opportunity for him to put his case to a wider audience on his forthcoming libel action defence, the writ for which had already been served.

In 1989, Lord Aldington, previously a British officer, former Chairman of the Conservative Party, and then Chairman of Sun Alliance, an insurance company, commenced the libel action over allegations of war crimes made by Tolstoy in a pamphlet distributed by Nigel Watts, a man involved with Sun Alliance on an unrelated insurance matter. Although Tolstoy was not the initial target of the action, he felt honour-bound to join Watts as defendant. He lost and was ordered to pay £2 million (£1.5 million in damages and £0.5 million in costs). Documents subsequently obtained from the Ministry of Defence showed that under Government instructions files essential to the defence case had been withdrawn from the Public Record Office and retained by the MoD and Foreign Office throughout the run-up to the trial and the trial itself.The Sunday Times, 7 April 1996) Tolstoy sought to appeal on the basis of new evidence proving Aldington had perjured himself over the date of his departure from Austria in May 1945. This was ruled inadmissible at a hearing in the High Courts of Justice, from which the press and public were barred, and his right to appeal was rejected.The Guardian, 28 May 1992, p.19, and 8 June 1992, p.4