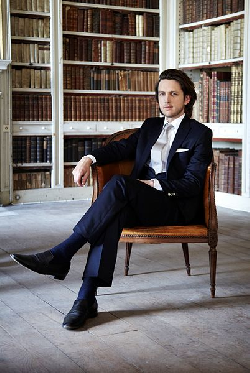 Shaftesbury’s father, Anthony Ashley-Cooper, 10th Earl of Shaftesbury, had been murdered in November 2004 by the brother of his third wife, Jamila M’Barek, but his body was not discovered until April 2005. A month later, on 15 May 2005, Shaftesbury’s brother, Anthony, the 11th Earl, died of a heart attack and the peerage devolved upon Nicholas. Following his brother’s death, Shaftesbury relocated to his family home from New York City and assumed the responsibilities of the earldom. He also holds the subsidiary titles Baron Ashley and Baron Cooper.

On 11 September 2010, Lord Shaftesbury married Dinah Streifeneder. Professionally, the Countess of Shaftesbury is a veterinary surgeon. Together, the 12th Earl and Countess of Shaftesbury are committed to philanthropic pursuits, expressing interests in conservation, animal welfare, and working to assist children with disabilities. Since inheriting the titles and estate, Lord and Lady Shaftesbury have pursued the restoration of St Giles House, in the hope that it might revitalise the local community.

With the family’s history, a tradition for public service and a strong social conscience, Lord Shaftesbury put his name forward as a candidate to become an elected Crossbench hereditary peer, on the death of the 4th Viscount Colville of Culross in April 2010 and the By-election in June which followed. The eventual victor was the 9th Earl of Clancarty. He has since attempted to be elected as a crossbench peer in several subsequent by-elections in the House of Lords, without success.

While Ashley-Cooper was attending school during his youth, he was an accomplished cross country runner. While setting it aside during his adulthood, he eventually picked it up again during his late 20s, in response to his desire to "get into shape". To this end, he has competed in several marathons and cross country runs to benefit charitable organisations.

On 13 April 2008, Shaftesbury completed his first major run with team member and friend, Rob Jenkins, in the London Marathon. Set over a largely flat course around the River Thames, the race begins at three separate points around Blackheath and finishes in The Mall alongside St. James’s Palace.

Participation in the marathon served to benefit the charitable organisation, Phab Limited, which is a national charity working to promote and encourage disabled and non-disabled individuals live and work in an integrated and welcoming society. The 12th Earl trained with the goal to complete the course in under four hours. He completed the race in three hours and 20 minutes and raised £8657.

On 26 October 2008, Shaftesbury took part in his first endurance run with the 4 Deserts, which is a series of four, six-day, self-supported footraces across some of the most unwelcoming deserts on Earth. These deserts include the Gobi in China, the Atacama in Chile, the Sahara Desert in Egypt and Antarctica. Each race is 250 kilometers long with the final race being The Last Desert, held in Antarctica. To qualify for the last race, runners must have successfully completed two of the other three races. , he has completed the Sahara Desert race and the Atacama Desert in Chile, which was completed in March 2011.

The Sahara Race was a six-day, 250-kilometer footrace across the Sahara Desert of Egypt, which is the hottest desert on earth. The main obstacles faced include the relentless heat and soft sand dunes. Shaftesbury’s goal included raising funds for AbleChildAfrica. He finished 31st in the race and raised £4000.90.

On 17 May 2009, Shaftesbury participated in his second desert race, running across the country of Namibia in the ultramarathon, Racing the Planet: Namibia. The course is a seven-day, self-supported footrace that winds its way through huge sand dunes, deep canyons, mountain ranges and along the famous Skeleton Coast.