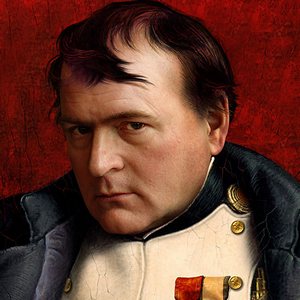 Napoleon Bonaparte was born on Corsica, in Ajaccio, on the 15th of August in 1769. He was the second child in the family, five from twelve his brothers and sisters didn’t live for a year. Napoleon’s father Carlo Bonaparte too part in the war for Corsica’s independence, but after the island became French he started to support French regime. He acted so zealously that receive confirmation of noble title from Louis XV in 1771.

With the help of father elder sons received royal grants and in 1778 they left Corsica and went to the college in Autun. Brothers had a course of the French language there, but Napoleon didn’t come easily to him and till the end of his life he spoke with strong Corsican accent. His elder brother Joseph wanted to become a priest. Napoleon chose a military school in Brienne to educate in it. It seemed to be a simple and natural choice for a Corsican boy but it determined Europe’s fate for several centuries forward.

Napoleon studied irregularly. Mathematics and exact science came easily to him, but he wasn’t interested in the humanities. For example, he was so “succeed” in Latin that even wasn’t allowed to take the examinations. In spite of the fact that Napoleon read a lot, there was also some disbalance. He was interested in actions and destinies of famous commanders – Julius Caesar, Alexander the Great and other. But there were disciplines in which Napoleon passed ahead his classmates because of his passion for reading. Philosophy, artillery, tactics and strategics, geography came easy to him. Napoleon, to his surprise, won the competition “Queen’s necklace”, the main price was acceptance to the Paris Royal Military school. He couldn’t learn languages there too, but he showed wonderful talents during studies of hydrostatics, differential calculus and law. Napoleon didn’t have friends in any school because of his irascible Corsican temper and disapproval of French supremacy on Corsica.

In 1785 (on the 14th of February) Napoleon’s father died, and the young cadet had to took charge of the head of the family. He finished education before the appointed time and started to work in Valence as a lieutenant, he always helped mother and younger brothers and sisters in spite of his difficult financial situation. Napoleon passed through the whole way of the French army’s promotion in rank for ten years. It is an interesting fact that in 1788 he tried to change service and join the Russian army to take part in the war with Turkey, but his candidacy was declined by general-lieutenant Zaborovsky. Napoleon’s first battle experience – during the expedition in Sardinia – revealed his firmness, quick wit and loyalty to his duty. The expedition was a shattering failure, but the young artillery officer was noticed, because he tried to save his battery to the last.

When the French revolution started Napoleon was on his native island. Four years later Napoleon’s idol of childhood – Paolo Pasquale – declared Corsica’s independence; Napoleon was very disappointed, because he shared ideas of revolution and considered Paolo’s actions as betrayal. Napoleon returned to France in September of 1793. He confirmed his rank in the army and showed heroism during the Toulon’s taking, at the age of 24 he became a brigadier general. Napoleon continued to serve in the army and took part in the dispersal of mutinies in Paris, he got a rank of a divisional general and a post of a commander of rear army. In March of 1796 Napoleon married a widow of the duke Beauharnais who was an executed general during the Jacobins – her name of Josephina. At that time he also became a commander of the Italian army and defeated united army of Austria and Sardinia. This victory put him in one row with the greatest strategists and commanders. A period of Napoleon’s wars, which lasted for twenty years, started in Europe.

In 1799 Bonaparte was in Egypt as a head of expedition corps. At that time the Directory, which was corroded by corruption, practically betrayed revolutionary ideas, and a field marshal Suvorov, who was in command of the united Russian-Austrian army, eliminated all previous success of Napoleon. Napoleon returned in France where with the help of army and Joseph Fouche he declared about a liquidation of representative authorities and the Directory itself and on the 9th of November in 1799 proclaimed the regime of consulate. The new constitution divided legislative power in two parts, it made governance practically impossible.