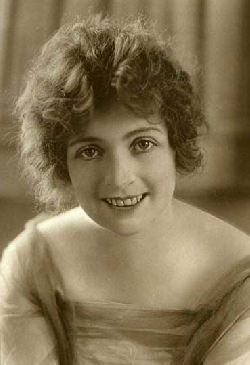 Myrtle Gonzalez (September 28, 1891 &ndash; October 22, 1918) was an American actress. She starred in at least 78 silent era motion pictures from 1913 to 1917, of which 66 were one and two-reel shorts. She is regarded as Hollywood’s first Latin and Hispanic movie star actress. By Rosa Linda Fregoso

Gonzalez was best known for her role as Enid Maitland in Vitagraph’s six-reel feature length drama The Chalice of Courage (1915) opposite William Duncan. A magazine writer once called her "The Virgin White Lily of the Screen."

Because she grew up in Los Angeles, the shift of movie production to her hometown was a big advantage for her. Gonzalez worked for such studios as Vitagraph and Universal.

In many of her roles, Gonzalez typified a vigorous out-of-doors type of heroine. During the last six years of her career, many of the movies she starred in were stories of the snow country and of the forests.

On December 1, 1917, she and actor/director Allen Watt (1885&ndash;1944) were married in Los Angeles.Los Angeles Times, Dec. 5, 1917, "Film Actress Bride Of Army Officer. — Capt. Allen Watt Comes From Camp Lewis To Wed Miss Gonzalez," p. 14. She then gave up her screen work and retired. Watt, who was formerly an assistant director at Universal, where they met, was then in the U.S. Army and she returned with him to Camp Lewis, in Washington State. Her health was too frail for the climate, however, and Capt. Watt was placed on the retirement list so he could return her to Southern California. He went back to work at Universal and began directing.

Her paternal side comes from a native Hispanic Californio family of Spain, By Rosa Linda Fregoso while her maternal grandparents were born in Ireland. Her father was a retail grocer, her mother a former opera and popular singer.

From early childhood, Myrtle displayed remarkable dramatic talent, and she had a good soprano voice. She appeared in many local concerts and benefits and sang in church choirs. She later played juvenile parts on the stage with Fanny Davenport and Florence Stone.