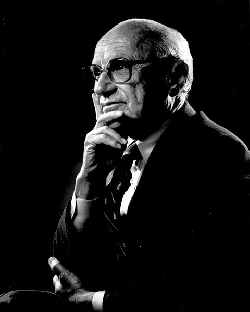 Milton Friedman (July 31, 1912 – November 16, 2006) was an American economist, statistician, and writer who taught at the University of Chicago for more than three decades. He was a recipient of the Nobel Memorial Prize in Economic Sciences, and is known for his research on consumption analysis, monetary history and theory, and the complexity of stabilization policy. As a leader of the Chicago school of economics, he profoundly influenced the research agenda of the economics profession. A survey of economists ranked Friedman as the second most popular economist of the twentieth century after John Maynard Keynes,Davis, William L, Bob Figgins, David Hedengren, and Daniel B. Klein. , Econ Journal Watch 8(2): 126–146, May 2011. and The Economist described him as "the most influential economist of the second half of the 20th century…possibly of all of it."

Friedman’s challenges to what he later called "naive Keynesian" (as opposed to New Keynesian) theory began with his 1950s reinterpretation of the consumption function, and he became the main advocate opposing activist Keynesian government policies. In the late 1960s he described his own approach (along with all of mainstream economics) as using "Keynesian language and apparatus" yet rejecting its "initial" conclusions. During the 1960s he promoted an alternative macroeconomic policy known as "monetarism". He theorized there existed a "natural" rate of unemployment, and argued that governments could increase employment above this rate (e.g., by increasing aggregate demand) only at the risk of causing inflation to accelerate.Among macroeconomists, the "natural" rate has been increasingly replaced by James Tobin’s NAIRU, the non-accelerating inflation rate of unemployment, which is seen as having fewer normative connotations. He argued that the Phillips curve was not stable and predicted what would come to be known as stagflation.Nobel prize winner Paul Krugman stated that, "In 1968 in one of the decisive intellectual achievements of postwar economics, Friedman not only showed why the apparent tradeoff embodied in the idea of the Phillips curve was wrong; he also predicted the emergence of combined inflation and high unemployment…dubbed ‘stagflation.” Paul Krugman, Though opposed to the existence of the Federal Reserve, Friedman argued that, given that it does exist, a steady, small expansion of the money supply was the only wise policy.

Friedman was an economic adviser to Republican U.S. President Ronald Reagan. His political philosophy extolled the virtues of a free market economic system with minimal intervention. He once stated that his role in eliminating U.S. conscription was his proudest accomplishment, and his support for school choice led him to found The Friedman Foundation for Educational Choice. In his 1962 book Capitalism and Freedom, Friedman advocated policies such as a volunteer military, freely floating exchange rates, abolition of medical licenses, a negative income tax, and education vouchers. His ideas concerning monetary policy, taxation, privatization and deregulation influenced government policies, especially during the 1980s. His monetary theory influenced the Federal Reserve’s response to the global financial crisis of 2007–08.

In 1997, he received the Chicago History Museum "Making History Award" for Distinction in Literature. Friedman allowed the Cato Institute to use his name for its biannual Milton Friedman Prize for Advancing Liberty beginning in 2001. A Friedman Prize was given to the late British economist Peter Bauer in 2002, Peruvian economist Hernando de Soto in 2004, Mart Laar, former Estonian Prime Minister in 2006 and a young Venezuelan student Yon Goicoechea in 2008. His wife Rose, sister of Aaron Director, with whom he initiated the Friedman Foundation for Educational Choice, served on the international selection committee. Friedman was also a recipient of the Nobel Prize in Economics.