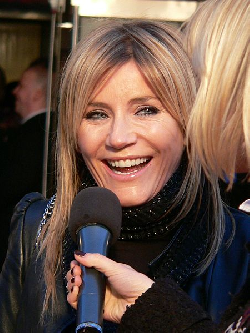 Michelle Danielle Collins (born 28 May 1962http://www.dailymail.co.uk/femail/article-2048399/Michelle-Collins-London-fashion-designers-snooty-theyre-friendlier-North.html) is an English television actress. She is best known for playing Stella Price in the soap opera Coronation Street and previously for playing Cindy Beale in EastEnders. She also appeared in the BBC dramas Sunburn and Two Thousand Acres of Sky. At one time, she was also a TV presenter on The Word.

After leaving EastEnders in 1998 (when her character met an untimely demise offscreen), her career flourished with a series of drama roles. These include: two series of Real Women (BBC One); two series of Sunburn (BBC One), for which Collins also sang the theme song (which was a no. 28 hit in the UK Singles Chart in 1999); Daylight Robbery (ITV); The Sleeper (BBC One); Uprising (ITV): three series of Two Thousand Acres of Sky (BBC One): the two-part series Perfect (ITV); Lloyd and the Hill (ITV) and Ella and the Mothers (BBC One). In 2003 Collins played Sarah Barton in Single.

In 2003, Collins filmed the BBC drama Sea of Souls and then went on to star in a film for Granada/Channel 4 called The Illustrated Mum, which told the story of two girls coping with the unpredictable behaviour of their depressed, alcoholic mother. The film, written by Jacqueline Wilson, was based on the children’s novel of the same name. It was screened to great acclaim over Christmas 2003 and won an Emmy Award and two BAFTAs.

In 2004, she starred in an episode of the British comic sketch show French and Saunders and also starred alongside fellow EastEnders actor Martin Kemp in the ITV drama Can’t Buy Me Love, which was watched by nearly eight million viewers. The programme was inspired by the real-life story of Howard Walmsley, who was jailed for fraud after pretending to win the lottery in order to keep his wife Donna (played by Collins) from leaving him. Their lives and marriage were subsequently turned upside down by the events that unfolded.

She starred in the West End musical Daddy Cool, and while working during the night there shot sequences for a cameo in the short film Broken written and directed by Vicki Psarias, which went on to win the several international awards. She also featured in the film Don’t Stop Dreaming, released in 2007. She left Daddy Cool in January 2007 to shoot the Doctor Who episode "42".

On 2 July 2007, it was announced that Collins has been cast for the lead role of Karina Faith in new ITV drama series, Rock Rivals, produced by Shed Productions."", Digital Spy