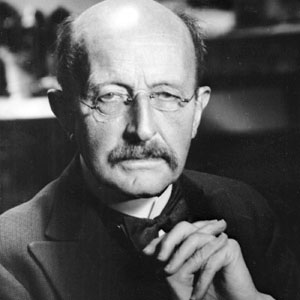 Max Planck was born in the family of lawyers and scientists who paid much attention to educating their children. Planck’s great grandfather Gotlib Jacob Planck (1751 – 1833) and grandfather Henry Louise Planck (1785 – 1831) were professors of theology in Gottingen. Max’s father was a professor of law in Munich and Kiel.

Max finished a gymnasium in Munich, where he showed his outstanding capacity of work and giftedness in many disciplines. It was not easy for Max Planck to choose physics, as he was also very attracted by music and philosophy. Moreover, one of his teachers, Philip Jolly, affirmed that there was nothing left to discover in physics. Max Planck studied physics in Berlin and Munich.

Max Planck made research mostly in thermodynamics. He became famous after he explained the spectrum of so-called “absolute black body” in 1900, making the base of such field as quantum physics. “Absolute black body” was called a certain object the radiation of which demanded only on temperature and the seen area of surface. Planck brought in the idea of quantum nature of radiation, which opposite to views about the continuity of all processes in physics. That view was the base of physical picture of world, built by Newton and Leibnitz. According to the theory of Planck, radiation was emitted and absorbed by quant with energy of each quant.

Planck used more or less standard theoretical technology of static physics and got the correct formula of spectrum density of radiation of the “black body” warmed to the temperature T.

Planck’s contribution to modern physics was only in discovering quant and a coefficient, which is nowadays called in his honor. Albert Einstein’s special relativity theory, which was published in 1905, made great impression for Planck. The full support which was given by Planck promoted the acceptance of the relative theory among physics.

Using relative methods, Planck made great contribution in developing of quant physics area in the beginning of the century. So, one of the most important theoretical discoveries, conception of photon impulse, belonged to Max Planck. Max Planck made that research starting with the fact that the energy of photon, discovered by that time by Einstein, and its impulse had to be the components of the united 4-vector. That theory was later generalized to all particles by de Broglie and became one of the fundamental theories of quantum physics.

Max Planck also took part in research in quantum physic, that later gave the ability to reveal the structure of classic mechanics (especially in its Hamilton’s form) and show it as a utmost case of quantum structure.

Planck played very important role at the discussions of the problems of contemporary physics, taking part in congresses.

In addition to his achievements, Max Planck offered his own version of Fokker’s equation (nowadays called Fokker-Planck equation), which was describing the behavior of systems of particles under the influence of accidental impulses. Max Planck was given the Nobel Prize in 1918 for his contribution to the development of quantum physics.

During the Second World War, Max Planck tried to convince Hitler to preserve lives of Jewish people. But at the same time he continued working in different scientific organizations of Germany, hoping to maintain Germany science and help other scientists.

Max Planck died on 4 October 1947. There were stamped his name and the numeral value of Planck’s coefficient on the gravestone.

Shaving decided to devote his life to physics, Max Planck told his seventy years old teacher, Philip Jolly who used to teach in Munich University, about his decision. The teacher tried to dissuade Planck, explaining that all the possible research in theoretical physics had already been done and there was nothing to discover in it.

Max Planck was famous for his quick-witted mind.

Planck proved that a tea cup had two handles unfurled to 360 degrees.

Moritz Schlick was the follower of Max Planck.

A crater on the Moon, a mathematic formula, a society and a cosmic observatory were called in Max Planck’s honor.