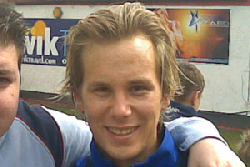 Markus Neumayr (born 26 March 1986 in Hösbach) is a German football player who plays as a midfielder for Swiss club AC Bellinzona.

Neumayr started his football career playing for local clubs before moving to Eintracht Frankfurt in 2003 However, within a few months, he was picked up by Manchester United. During his spell with Manchester United, he played on the right side of midfield, although on some occasions he would play in the middle of the park.

In the three seasons Neumayr spent at Old Trafford, he never played in a match for the first team. He was once called into the squad on 29 March 2006 for the match against West Ham United but did not make the final sixteen. When David Fox departed to Blackpool, Neumayr took on the role of reserve team captain. With this added responsibility, many believed it would only be a matter of time before he would go on and make the first team. However, this never materialised, and Neumayr was released from the club at his own request at the end of the 2005–06 season, joining Duisburg. After a year with SV Zulte Waregem he signed in summer 2009 for Rot-Weiss Essen.

On 20 June 2008, Neumayr signed a deal at Belgian First Division club Zulte Waregem. His contract at Duisburg was not renewed, and so he was able to join Zulte Waregem on a free transfer. In January 2009, he returned to Germany, signing for RW Essen. In April 2010 he announced his transfer to Wacker Burghausen for the 2010–11 season., before joining FC Thun the following January. Neumayr joined AC Bellinzona (Swiss Challenge League) in June 2011.