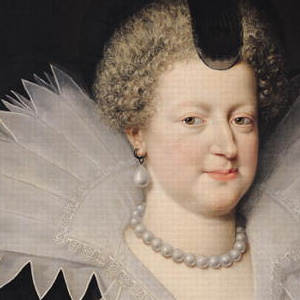 Marie de Medici was married to French Henry IV by her uncle Ferdinand Medici, who was the duke of Toscana. By that time Henry IV divorced with his infertile wife, Margaret Navarre. Marie de Medici was beautiful, but she averted her husband with her too much imperious character and repetitive scenes of jealousy (it should be mentioned that the scene were absolutely not unfounded). The most hated fact for Henry was the strong influence of Marie’s fawner Leonora Galigai and her husband Concini.

When Henry decided to move his forces to Germany in 1610, in order to support Protestants, she persuaded him to crown her. Marie de Medici was crown on 13 May of 1610. The following day king Henry was killed by Ravaillac. Since that, Marie de Medici had been suspected in taking part of that murder.

She became the regent of her son, Louis XIII, but however, with some obstacles. High aristocracy society was not pleased with her, so Marie looked for support at Clerical and Spanish parties. Her main advisers became the ambassadors of Spain and Rome, and also Concini. Concini became marquise d’Ancre and the Marshal of France with Marie’s support. Princes and aristocracy started riots from time to time and Marie de Medici had to suppress them with efforts, and that also brought a lot of victims.

After the proclamation of the young king’s full age in 1614, Marie managed to hold the reins of power until Louise, who was instigated by his favour Charles d’Albert, ordered to execute Concini and move his mother away to Blois. All was done.

In February of 1619 Marie escaped to Angouleme and later reconciled with her son, it happened only after Charles d’Albert died. In 1621 Marie de Medici returned to Paris where he became the head of the government council. In order to strengthen her positions she gave her person in attendance, Cardinal Richelieu, a position in the ministry. But later she was pushed aside by him. All her efforts to move Richelieu away were in vain and on 11 November 1630, the so called day of deceived, she had to confess that Richelieu won. In June of 1631 he escaped to Brussels. With Richelieu’s demanded he had to leave Brussels, and she moved to England and then to Cologne, where she died alone in poverty in Rubens’s house in the Flower side street.