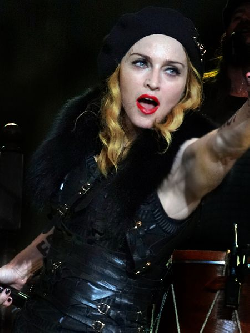 Madonna Louise Ciccone ( born August 16, 1958) is an American singer-songwriter, actress, author, director, entrepreneur and philanthropist. Born in Bay City, Michigan, she moved to New York City in 1977 to pursue a career in modern dance and performed in the music groups Breakfast Club and Emmy. In 1982, Madonna signed to Sire Records (an affiliate of Warner Bros. Records) and released her self-titled debut album the following year. She has since released a series of successful albums, including the Grammy Award winners Ray of Light (1998) and Confessions on a Dance Floor (2005). Many of her songs peaked atop record charts, including "Like a Virgin", "Into the Groove", "Papa Don’t Preach", "Like a Prayer", "Vogue", "Frozen", "Music", "Hung Up", and "4 Minutes".

Madonna is known for continuously reinventing both her music and image, and for retaining a standard of autonomy within the recording industry. She attained immense popularity by pushing the boundaries of lyrical content in mainstream popular music and imagery in her music videos, which became a fixture on MTV. Critics have praised her diverse musical productions which have also been known to induce controversy.

Madonna received generally positive reviews for her role in Desperately Seeking Susan (1985), though her later film appearances received mixed commentary. She received critical acclaim and a Golden Globe Award for Best Actress in Motion Picture Musical or Comedy for Evita (1996), but has received harsh feedback for other performances. She has been recognized as an acclaimed businesswoman, involving herself in fashion design, writing children’s books, and film directing and producing. In 1992, she founded entertainment company Maverick as a joint venture with Time Warner, which also included the label Maverick Records. In 2007, she signed a US $120&nbsp;million record, touring and merchandising 360° deal with Live Nation, resulting in her leaving Warner Bros., her label since 1982.

Madonna has sold more than 300&nbsp;million records worldwide and is recognized as the best-selling female recording artist of all time by Guinness World Records. Time considered her to be one of the "25 Most Powerful Women of the Past Century" for being an influential figure in contemporary music. Madonna is the best-selling female rock artist of the 20th century and the second best selling female artist in the United States, with 64.5 million certified albums. Considered by Forbes and other publications as a cultural icon, she is often referred by the international press as the "Queen of Pop". In 2008, Billboard ranked her at number two, behind only The Beatles, on the Billboard Hot 100 All-Time Top Artists, making her the most successful solo artist in the history of the chart. She was also inducted into the Rock and Roll Hall of Fame in the same year. In 2012, she was crowned the "Greatest Woman In Music" by VH1. As of 2013, some sources report that Madonna’s net worth has crossed over one billion dollars.

Madonna Louise Ciccone was born in Bay City, Michigan, on August 16, 1958. Her father, Silvio Anthony Ciccone, is a first-generation Italian American (with roots in Pacentro, Italy), while her mother, Madonna Louise (née Fortin), was of French Canadian descent. Her father worked as a design engineer for Chrysler and General Motors. As Madonna had the same name as her mother, family members called her "Little Nonni". The third of six children from her father’s first marriage, her full-blood siblings are: Martin, Anthony, Paula, Christopher, and Melanie. Madonna was raised in the Roman Catholic faith. Upon receiving confirmation in 1966, she adopted Veronica as an additional confirmation name. She was raised in the Detroit suburbs of Pontiac and Avon Township (now part of Rochester Hills). Her mother died of breast cancer at the age of 30, in 1963. Months before her mother’s death, Madonna noticed changes in her behavior and personality, although she did not understand the reason. Mrs. Ciccone, at a loss to explain her medical condition, would often begin to cry when questioned by Madonna. Madonna later acknowledged that she had not grasped the concept of her mother dying.