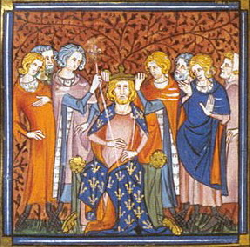 Louis V (c. 967 – 21 May 987), was the King of Western Francia from 986 until his premature death. He died childless and was the last monarch in the Carolingian line.

The son of King Lothair and his wife Emma, a daughter of Lothair II of Italy, Louis was born .Detlev Schwennicke, Europäische Stammtafeln: Stammtafeln zur Geschichte der Europäischen Staaten, Neue Folge, Band II (Marburg, Germany: Verlag von J. A. Stargardt, 1984), Tafel 1 Louis was crowned in June 978 but did not actually assume power until Lothair’s death in 986.Jim Bradbury,The Capetians: Kings of France, 987-1328 (London: Hambledon Continuum, 2007), p. 45 Louis V was the last Carolingian King of Western Francia and reigned in Laon from 2 March 986 until his own death, at the age of 20, in 987. It may be because he reigned for only one year that medieval biographers awarded him the title qui nihil fecit – "who did nothing".

He married Adelaide-Blanche of Anjou in 982 in Brioude, where they were immediately crowned King and Queen of Aquitaine.Pierre Riché, The Carolingians; A Family who Forged Europe, Trans. Michael Idomir Allen (Philadelphia: University of Pennsylvania Press, 1993), p. 265 The couple was mismatched—Louis was fifteen years old and Adelaide was forty or more and on her third marriage—and they had no children together. In less than a year the marriage had ended.Bernard S. Bachrach, Fulk Nerra the Neo-Roman Consul, 987-1040 (University of California Press, 1993), p. 15

He inherited a battle between his father’s line of elected kings, which had been interrupted twice by the Robertian kings, and the house of the Holy Roman Emperor Otto I. As defender of Rome, Otto had the power to name the clergy in Carolingian territory, and the clergy he had named were not supporting the Carolingians.

One particular foe was Adalberon, archbishop of Reims whom Otto I had elevated to the powerful archbishopric of Reims. During Lothair’s time, Adalberon had tried to negotiate an alliance between the two houses; but the deal had gone bad, and Lothair had tried him for treason in 986. Lothair died at around the same time. Louis V inherited the throne; Lothair’s widow, Emma, married a descendant of Otto I; and Louis V received Adalberon again.

Louis died on 21 May 987Detlev Schwennicke, Europäische Stammtafeln: Stammtafeln zur Geschichte der Europäischen Staaten, Neue Folge, Band III Teilband 1 (Marburg, Germany: Verlag von J. A. Stargardt, 1984), Tafel 116 from a fall while hunting near the town of Senlis, OiseJim Bradbury,The Capetians: Kings of France, 987-1328 (London: Hambledon Continuum, 2007), p. 46 He had reopened the case against Adalbero of Reims for treason, but his accidental death ended the matter.Pierre Riché, The Carolingians; A Family who Forged Europe, Trans. Michael Idomir Allen (Philadelphia: University of Pennsylvania Press, 1993), p. 277 He left no legitimate heirs, so his uncle Charles, Duke of Lower Lorraine, was nominated as the hereditary successor to the throne. But the clergy, including both Adalberon and Gerbert (who later became Pope Sylvester II), argued eloquently for Hugh Capet, who was not only of royal blood but had proven himself through his actions and his military might. Capet was elected to the Frankish throne and Adalberon crowned him, all within two months of Louis V’s death. Thus the Carolingian dynasty ended and the Capetian began.