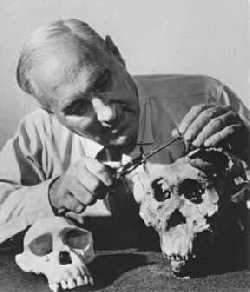 Map of Kenya. Louis Seymour Bazett Leakey (L.S.B. Leakey) (7 August 1903 – 1 October 1972) was a British archaeologist and naturalist whose work was important in establishing human evolutionary development in Africa, particularly through his discoveries in the Olduvai Gorge. He also played a major role in creating organizations for future research in Africa and for protecting wildlife there. Having been a prime mover in establishing a tradition of palaeoanthropological inquiry, he was able to motivate the next generation to continue it, notably within his own family, many of whom also became prominent. Leakey participated in national events of British East Africa and Kenya during the 1950s.

In natural philosophy he asserted Charles Darwin’s theory of evolution unswervingly and set about to prove Darwin’s hypothesis that humans arose in Africa. Leakey was also a devout Christian.Reported in Ancestral Passions, Chapter 3.

Louis and Mary spent all the time they could at Olduvai, starting in 1951. So far they had discovered only tools. A trial trench in Bed II at BK in 1951 was followed by a more extensive excavation in 1952. They found what Louis termed an Olduwan "slaughter-house", an ancient bog where animals had been trapped and butchered. Louis was so carried away that he worked without his hat and his hair was bleached white from the sun. They stopped in 1953.

In 1955 they excavated again with Jean Brown. She related that he preferred to be called Louis, was absent-minded, once had everyone looking for spectacles that were around his neck, wore pants with the buttons off and shoes with holes in them, charged about everywhere and once collapsed unconscious. He was completely happy.This Olduvai period, including Jean’s description of Louis, is from Morell, Chapter 12, "Our Man."

In 1959 they decided to excavate Bed I. While Louis was sick in camp, Mary discovered the fossilized skull OH 5 at FLK, which Mary called "Our Man", and became "Dear Boy" and "Zinj." The question was whether it was a previous genus discovered by Robert Broom, Paranthropus, which Broom had taken not to be in the human line, or a different one, in it. Louis opted for Zinj, a decision opposed by Wilfrid Le Gros Clark, but one which attracted the attention of Melville Bell Grosvenor, president of the National Geographic Society. That contact resulted in an article in National GeographicSeptember, 1960, Finding the World’s Earliest Man. and a hefty grant to continue work at Olduvai.

Also in 1960 Jack Evernden and Garniss Curtis, young geophysicists, dated Bed I to 1.75 mya. The world was stunned. Zinj was far older than anyone had imagined. Scientists swarmed to Africa. Reck and Louis were completely vindicated, too late for Reck, who had died in 1937.The material on Zinjanthropus and the dating of Bed I is from Morell, Chapter 13, "Fame, Fortune and Zinj."

In 1960, unable to leave the museum except on weekends, Louis appointed Mary director of excavation at Olduvai. She brought in a staff of Kamba tribesmen, instead of Kikuyu, who, she felt, took advantage of Louis. The first, Muteva Musomba, had kept her children’s ponies. He recruited Kamoya Kimeu among others. Mary set up Camp 5 under Jonathan’s direction. He was 19. From then on she had her own staff and associates.