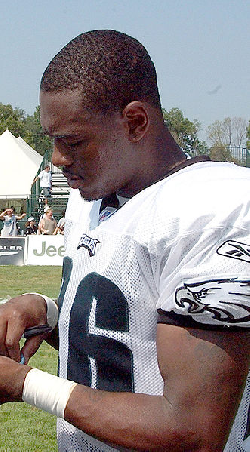 Lito Decorian Sheppard (born April 8, 1981) is an American football cornerback who is currently a free agent. He was drafted by the Philadelphia Eagles in the first round of the 2002 NFL Draft after playing college football for the University of Florida. He played for the Eagles for seven seasons, and was selected to the Pro Bowl in 2004 and 2006 during his tenure. He played for the New York Jets in 2009, the Minnesota Vikings in 2010, and the Oakland Raiders in 2011.

Sheppard received an athletic scholarship to attend the University of Florida in Gainesville, Florida,GatorZone.com, Football History, 2001 Roster, . Retrieved April 12, 2011. where he played college football for coach Steve Spurrier’s Florida Gators football team from 1999 to 2001., University Athletic Association, Gainesville, Florida, pp. 80, 89, 94, 97, 136, 148&ndash;150, 154, 185 (2011). Retrieved August 31, 2011. He was a first-team All-American as a sophomore in 2000, and a first-team All-Southeastern Conference (SEC) selection in 2000 and 2001. In his three-season college career, he started twenty-two games, recorded eight interceptions, had eighty-seven tackles, and returned twenty-seven kickoffs for 472 yards (an average of 22.5 yards per return). Sheppard declared himself eligible for the NFL Draft after his junior year.

In the 2002 NFL Draft, Sheppard was selected in the first round (twenty-sixth pick overall) by the Philadelphia Eagles.National Football League, Draft History, . Retrieved May 23, 2010.

2005 was the first of three injury filled seasons for Sheppard. He missed six games and finished with three interceptions.

On October 8, 2006, Lito became the first player in NFL history to have two interception returns of more than 100 yards. Both returns came against the Dallas Cowboys (2004 and 2006). The most recent return sealed a 38-24 win over the Cowboys and secured 1st place in the division for the Eagles.

In a 2007 game against the Green Bay Packers Sheppard suffered an injury. Sheppard went through another injury-filled season and finished with two interceptions.

In the 2008 offseason, the Philadelphia Eagles signed former New England Patriots cornerback Asante Samuel. This fueled speculation that Sheppard was available via trade. That offseason, he changed agents to Drew Rosenhaus.

During the 2008 season, Sheppard saw much reduced action due to good performances by starting corners Asante Samuel and Sheldon Brown.

Sheppard was signed by the Oakland Raiders on August 26, 2011, released during the final cuts on September 3, and then re-signed by the team on October 31. During the remainder of the season, he played in nine games and started seven of them. He became a free agent after the season.Roshan Bhagat, "," Football’s Future (undated). Retrieved March 15, 2012.

Sheppard was born in Jacksonville, Florida in 1981.Pro-Football-Reference.com, Players, . Retrieved April 12, 2011. He attended William M. Raines High School in Jacksonville, where he was an all-state and USA Today All-American at defensive back for the Raines Vikings high school football team."," Florida High School Athletic Association (December 4, 2007). Retrieved May 26, 2011. Sheppard had eighteen interceptions in twenty-nine games as a junior and senior, and led the Vikings to an undefeated season a state championship in 1998. In 2007, eight years after he graduated from high school, the Florida High School Athletic Association (FHSAA) recognized Sheppard as one of the "100 Greatest Players of the First 100 Years" of Florida high school football.

Sheppard is the cousin of NFL wide receiver Jabar Gaffney and is also the nephew of former NFL player Derrick Gaffney.