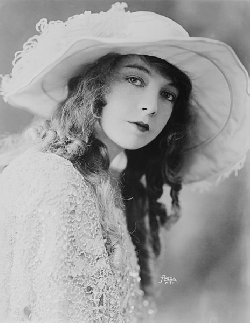 Lillian Diana Gish (October 14, 1893 February 27, 1993Although for many years it was believed that the Gish sisters were born with surname "De Guiche" or "de Guiche"; in actuality their surname was, in fact, Gish. According to "The Gish name was initially the source of some mystification. In 1922, at the time of the opening of Orphans of the Storm, Lillian reported that the Gish family was of French origin, descending from the Duke de Guiche…. [S]uch press-agentry falsification was common. Just a few years later the story was modified slightly so that de Guiche becomes the more illustrious Duc de Guise…. [A]mong the Gish ancestors were a great-uncle probably murdered on a business trip to Philadelphia and four cousins who served in the Civil War. Lillian’s father, James Leigh Gish was the youngest of four sons of David Gish (1814–1888) and Diana Caroline Waltz.") was an American stage, screen and television actress, director and writer whose film acting career spanned 75 years, from 1912 to 1987. Gish was called The First Lady of American Cinema.

She was a prominent film star of the 1910s and 1920s, particularly associated with the films of director D. W. Griffith, including her leading role in one of the highest grossing films of the era Griffith’s seminal Birth of a Nation (1915). Her sound-era film appearances were sporadic, but included memorable roles in the controversial western Duel in the Sun (1946) and the offbeat thriller Night of the Hunter (1955). She did considerable television work from the early 1950s into the 1980s, and closed her career playing, for the first time, opposite Bette Davis in the 1987 film The Whales of August.

Gish never married or had children. The association between Gish and D. W. Griffith was so close that some suspected a romantic connection, an issue never acknowledged by Gish, although several of their associates were certain they were at least briefly involved. For the remainder of her life, she always referred to him as "Mr. Griffith." Lillian Gish was the sister of actress Dorothy Gish. Gish was a survivor of the 1918 flu pandemic.Lillian Gish: The Movies, Mr. Griffith, and Me, ISBN 0-13-536649-6.

She was involved with producer Charles Duell and drama critic and editor George Jean Nathan. In the 1920s, Gish’s association with Duell was something of a tabloid scandal because he had sued her and made the details of their relationship public.

During the period of political turmoil in the US that lasted from the outbreak of WWII in Europe until the attack on Pearl Harbor, she maintained an outspoken non-interventionist stance. She was an active member of the America First Committee, an anti-intervention organization founded by retired General Robert E. Wood with aviation pioneer Charles Lindbergh as its leading spokesman. She said she was blacklisted by the film and theater industries until she signed a contract in which she promised to cease her anti-interventionist activities and never disclose the fact that she had agreed to do so.Sarles, Ruth and Bill Kauffman. A Story of America First: The Men and Women Who Opposed U.S. Intervention in World War II. Praeger, Westport, Conn., 2003, p. xxxvii.

She maintained a very close relationship with her sister Dorothy, as well as with Mary Pickford, for her entire life. Another of her closest friends was actress Helen Hayes; Gish was the godmother of Hayes’ son James MacArthur.

The sisters debuted in Griffith’s short film An Unseen Enemy (1912). Lillian went on to star in many of Griffith’s most acclaimed films, including The Birth of a Nation (1915), Intolerance (1916), Broken Blossoms (1919), Way Down East (1920) and Orphans of the Storm (1921). One of the enduring images of Gish’s silent film years is the climax of the melodramatic Way Down East, in which Gish’s character floats unconscious on an ice floe towards a raging waterfall, her long hair trailing in the water.