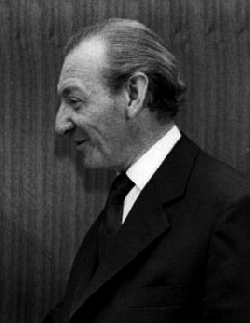 Kurt Josef Waldheim ( 21 December 1918 – 14 June 2007) was an Austrian diplomat and politician. Waldheim was the fourth Secretary-General of the United Nations from 1972 to 1981, and the ninth President of Austria, from 1986 to 1992. While he was running for President in Austria in 1985, his service as an intelligence officer in the Wehrmacht during World War II raised international controversy.

Waldheim was born in Sankt Andrä-Wördern, a village near Vienna, on 21 December 1918. His father was a Roman Catholic school inspector of Czech origin named Watzlawick, The Daily Telegraph, 15 June 2007. (original Czech spelling Václavík) who changed his name that year as the Habsburg monarchy collapsed. Waldheim served in the Austrian Army (1936–37) and attended the Vienna Consular Academy, where he graduated in 1939. Waldheim’s father was active in the Christian Social Party. Waldheim himself was politically unaffiliated during these years at the Academy. Shortly after the German annexation of Austria in 1938, a 20-year old Waldheim applied for membership in the National Socialist German Students’ League (NSDStB), a division of the Nazi Party.Report of the International Historical Commission of 8 February 1988, section on "Membership in National Socialist Organizations", as cited for example in http://nationalsozialismus.at/Themen/Umgang/waldheim.htm Shortly thereafter he became a registered member of the mounted corps of the SA.

On 19 August 1944, he married Elisabeth Ritschel in Vienna; their first daughter, Lieselotte, was born the following year. A son, Gerhard, and another daughter, Christa, followed.