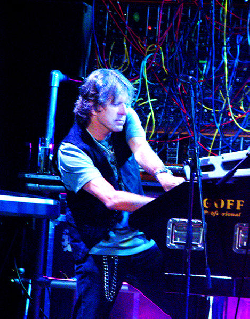 Keith Noel Emerson (born 2 November 1944, Todmorden, in the West Riding of Yorkshire), is an English keyboard player and composer. Formerly a member of the Keith Emerson Trio, John Brown’s Bodies, The T-Bones, The V.I.P.’s, P.P. Arnold’s backing band, and The Nice (which evolved from P.P. Arnold’s band), he was a founder of Emerson, Lake & Palmer (ELP), one of the early supergroups, in 1970. Following the break-up of ELP, circa 1979, Emerson had modest success with Emerson, Lake & Powell in the 1980s as well as with 3, with the album To the Power of Three. ELP reunited during the early 1990s, releasing the album Black Moon. Emerson also reunited The Nice in 2002 for a tour. His latest album, Keith Emerson Band featuring Marc Bonilla, was released in 2008.

Partial list of pieces based on other composers’ works

Note that lack of credit does not imply plagiarism. It is certain that, where required, royalties were paid to composers or their estates. Permission to use pieces was sometimes denied by the composer’s family or estate, as for instance with Gustav Holst’s Mars, the Bringer of War. Aaron Copland was said to be somewhat puzzled by Emerson’s take on Fanfare For the Common Man, but approved its use. Alberto Ginastera, on the other hand, was thrilled by Emerson’s electronic realisation of his first piano concerto, the fourth movement of which appeared on their album Brain Salad Surgery under the title "Toccata," and declared that he wished he could have done it in that fashion.