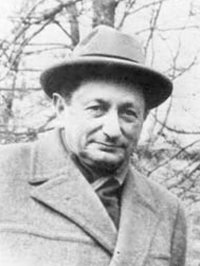 Kazimierz Kuratowski (February 2, 1896 – June 18, 1980) was a Polish mathematician and logician. He was one of the leading representatives of the Warsaw School of Mathematics.

Kazimierz Kuratowski was born in Warsaw, then part of the Russian Empire, on February 2, 1896. He was a son of Marek Kuratow, a barrister, and Róża Karzewski. He completed a Warsaw secondary school, which was named after general Paweł Chrzanowski. In 1913, he enrolled in an engineering course at the University of Glasgow in Scotland, in part because he did not wish to study in Russian; instruction in Polish was prohibited. He completed only one year of study when the outbreak of World War I precluded any further enrollment. In 1915, Russian forces withdrew from Warsaw and Warsaw University was reopened with Polish as the language of instruction. Kuratowski restarted his university education there the same year, this time in mathematics. He obtained his Ph.D. in 1921, in newly independent Poland.

In autumn 1921 Kuratowski was awarded the Ph.D. degree for his groundbreaking work. His thesis statement consisted of two parts. One was devoted to an axiomatic construction of topology via the closure axioms (Sur la notion de l’ensemble fini, "Fundamenta Mathematicae", 1/1920). This first part (republished in a slightly modified form in 1922) has been cited in hundreds of scientific articles.

While Kuratowski associated with many of the scholars of the Lwów School of Mathematics, such as Stefan Banach and Stanislaw Ulam, and the circle of mathematicians based around the Scottish Café he kept close connections with Warsaw. Kuratowski left Lwów for Warsaw in 1934, before the famous Scottish Book was begun (in 1935), hence did not contribute any problems to it. He did however, collaborate closely with Banach in solving important problems in measure theory.

In 1934 he was appointed the professor at Warsaw University. A year later Kuratowski was nominated as the head of Mathematics Department there. From 1936 to 1939 he was secretary of the Mathematics Committee in The Council of Science and Applied Sciences.

During and after the war

During World War II, he gave lectures at the underground university in Warsaw, since higher education for Poles was forbidden under German occupation.

After World War II, Kuratowski was actively involved in the rebuilding of scientific life in Poland. He helped to establish the State Mathematical Institute, which was incorporated into the Polish Academy of Sciences in 1952. From 1948 until 1967 Kuratowski was director of the Institute of Mathematics of the Polish Academy of Sciences, and was also a long-time chairman of the Polish and International Mathematics Societies. He was president of the Scientific Council of the State Institute of Mathematics (1968–1980). From 1948 to 1980 he was the head of the topology section. One of his students was Andrzej Mostowski.

Kuratowski’s research mainly focused on abstract topological and metric structures. He implemented the closure axioms (known in mathematical circles as the Kuratowski closure axioms), which was fundamental for the development of topological space theory and irreducible continuum theory between two points. The most valuable results, which were obtained by Kazimierz Kuratowski after the war are those that concern the relationship between topology and analytic functions (theory), and also research in the field of cutting Euclidean spaces. Together with Ulam, who was Kuratowski’s most talented student during the Lwów Period, he introduced the concept of so-called quasi homeomorphism that opened up a new field in topological studies. Kuratowski’s research in the field of measure theory, including research with Banach, Tarski, was continued by many students. Moreover, with Alfred Tarski and Wacław Sierpiński he provided most of the theory concerning Polish spaces (that are indeed named after these mathematicians and their legacy). Knaster and Kuratowski brought a comprehensive and precise study to connected components theory. It was applied to issues such as cutting-plane, with the paradoxical examples of connected components.