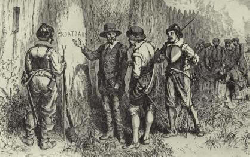 John White (c. 1540 &ndash; c. 1593) was an English artist, and an early pioneer of English efforts to settle the New World. He was among those who sailed with Richard Grenville to North Carolina in 1585, acting as artist and mapmaker to the expedition. During his time at Roanoke Island he made a number of watercolor sketches of the surrounding landscape and the native Algonkin peoples. These works are significant as they are the most informative illustrations of a Native American society of the Eastern seaboard; the surviving original watercolors are now stored in the print room of the British Museum.

Later, in 1587, White became governor of Sir Walter Raleigh’s failed attempt at a permanent settlement on Roanoke island, known to history as the "Lost Colony". This unsuccessful effort represented the earliest attempt at a permanent English colony in the New World, and White’s granddaughter Virginia Dare was the first English child born in the New World. After the failure of the Lost Colony, White retired to Raleigh’s estates in Ireland, reflecting upon the "evils and unfortunate events" which had ruined his hopes in America, though never giving up hope that his daughter and granddaughter were still alive.

John White’s exact date of birth is unknown but it seems likely he was born some time between 1540 and 1550. Retrieved March 2011 There is a record dated February 22, 1539 of a christening in the Church of St Augustine, London of a "John White" on that same day; but there is no proof this is the same person. White is known to have attended church in the parish of St. Martin Ludgate in London. In 1566 he married Tomasyn Cooper; with whom he had a son, Tom, who died young, and a daughter Eleanor. Little is known of White’s training as an artist but it is possible that he apprenticed as an illustrator under a London master.

Little is known of White’s life after the failure of the Roanoke Colony. He lived in Plymouth,as the will of his twin brother Robert White bequeathing him property in the city of Plymouth, referred to him as “of Plymouth”Transcripts of Robert White’s will are in the same MSS [Queen’s College, Oxford, MSS 137]; and in the New World Tapestry Library (as is the New World Tapestry) at the British Empire & Commonwealth Museum, Bristol, England. and also owned a house at Newtown, Kylmore (Kilmore, County Cork), Ireland. He appears to have been in Ireland living on the estates of Sir Walter Raleigh, making maps of land for Raleigh’s tenants, and reflecting upon the "evils and unfortunate events" which had ruined his hopes in the New World, though never giving up hope that his daughter and granddaughter were still alive.Milton, p.269

The last surviving document related to White is a letter he wrote from Ireland in 1593 to the publisher of the prints of his Roanoke drawings. However, a record from May 1606 that a Bridget White was appointed estate administrator for her brother "John White" may refer to him.

Governor of the Roanoke Colony

After Lane’s colonists returned to England in 1586 Sir Walter Raleigh, who held the land patent for the proposed English colony of Virginia, tasked White with the job of organizing a new colony in the Chesapeake Bay area, one which would be self-sustaining and which would include women and children. During 1586 White was able to persuade 113 prospective colonists to join Raleigh’s expedition, including his daughter Eleanor and his son-in-law Ananias Dare, recently married at St Bride’s Church in Fleet Street.Morgan, p.77 His efforts did not go unrewarded; on January 7, 1587 Raleigh named “John White of London Gentleman, to be the chief Governor” of the new colony, acting under the authority of the Virginia Company. White, with thirteen others, were incorporated under the name of “The Governor and Assistants of the Cities of Raleigh of Virginia”.Queen’s College, Oxford, MSS 137](a). On the occasion he was granted arms with eight quarters. The 1st contained his new arms: Ermine, on a canton Gules, a fusil Argent. The 2nd contained the ancient arms of White of Truro. The remaining six quarters contained the arms of some of his “Assistants”. This marshalling, other than being unorthodox, produced minute detail unsuitable for the New World Tapestry canvas. Therefore White (ancient) of Truro is depicted (Poptarts of 1587).