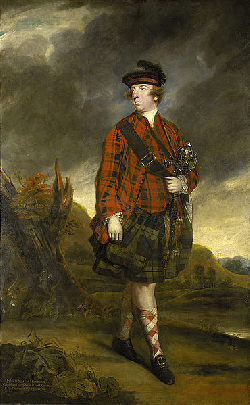 John Murray, 4th Earl of Dunmore (1730 – 25 February 1809), generally known as Lord Dunmore, was a Scottish peer and colonial governor in the American colonies. Named governor of the Province of New York in 1770, he succeeded to the same position in the Colony of Virginia the following year, after the death of Norborne Berkeley, 4th Baron Botetourt. As Virginia’s governor, Dunmore directed a series of campaigns against the trans-Appalachian Indians, known as Lord Dunmore’s War. He is noted for issuing a 1775 document proclaiming martial law in Virginia, (usually known as Dunmore’s Proclamation), in an attempt to turn back the rebel cause in Virginia. Dunmore fled to New York after the Burning of Norfolk in 1776, and later returned to Britain, although he did later spent time as Governor of the Bahama Islands, from 1787 to 1796. Dunmore was the last royal governor of Virginia.

Murray was born in Tymouth, Scotland. He was the eldest son of William Murray, 3rd Earl of Dunmore, and his wife, Catherine (née Murray); he was a nephew of John Murray, 2nd Earl of Dunmore. In 1745 William Murray and son, John (then only 15), joined the ill-fated campaign of "Bonnie Prince Charlie" (Charles Edward Stuart). Young Murray was appointed a page to Prince Charles. The second Earl, his uncle, remained with the Hanoverian regime.

After the Jacobite army was defeated at Culloden (1746), the Murray family was put under house arrest, and the patriarch, William, was imprisoned in the Tower. By 1750, William had received a conditional pardon. John was now 20, and joined the British Army. In 1756, after the deaths of his uncle and father, Murray became the fourth Earl of Dunmore.

Dunmore married Lady Charlotte, daughter of Alexander Stewart, 6th Earl of Galloway, in 1759. Their daughter, Lady Augusta Murray, was a daughter-in-law of King George III. The Dunmores had another daughter close to her age, Lady Catherine Murray, and soon after they landed in Virginia, they had another child, Lady Virginia Murray.

Dunmore became royal governor of the Colony of Virginia on 25 September 1771. Despite growing issues with Great Britain, his predecessor, Lord Botetourt, had been a popular governor in Virginia, even though he served only two years before his death. As Virginia’s colonial governor, Dunmore directed a series of campaigns against the Indians known as Lord Dunmore’s War. The Shawnee were the main target of these attacks, and his avowed purpose was to strengthen Virginia’s claims in the west, particularly in the Ohio Country. However, some accused Dunmore of colluding with the Shawnees and arranging the war to deplete the Virginia militia and help safeguard the Loyalist cause, should there be a colonial rebellion. Theodore Roosevelt, in his history of the Indian Wars, denied these accusations.Roosevelt, Theodore (1889). , Chapters VIII "Lord Dunmore’s War" and XI "The Battle of the Great Kanawha", passim.