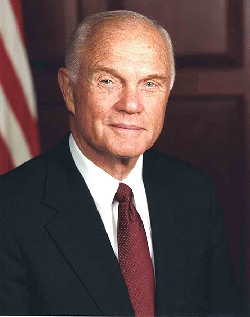 John Herschel Glenn, Jr. (born July 18, 1921) is a retired United States Marine Corps pilot, astronaut, and United States senator. He was the first American to orbit the Earth and the fifth person in space, after cosmonauts Yuri Gagarin and Gherman Titov and fellow Mercury Seven astrononauts Alan Shepard and Gus Grissom. Glenn was a combat aviator in the Marine Corps and one of the Mercury Seven, who were the elite U.S.&nbsp;military test pilots selected by the National Aeronautics and Space Administration&nbsp;(NASA) to operate the experimental Mercury spacecraft and become the first American astronauts. He flew the Friendship&nbsp;7 mission on February 20, 1962. In 1965, Glenn retired from the military and resigned from NASA so he could be eligible to stand for election to public office. As a member of the Democratic Party he was elected to represent Ohio in the U.S.&nbsp;Senate from 1974 to 1999.

Glenn received a Congressional Space Medal of Honor in 1978, and the Presidential Medal of Freedom in 2012. He was inducted into the Astronaut Hall of Fame in 1990. On October 29, 1998, he became the oldest person to fly in space, and the only one to fly in both the Mercury and Space Shuttle programs, when at age 77, he flew on Discovery (STS-95). Glenn and Scott Carpenter are the last living members of the Mercury Seven.

John Glenn was born in Cambridge, Ohio, to John Glenn, Sr. and Teresa (née Sproat).http://library.osu.edu/sites/archives/glenn/collection/audiovisuals/certificates.htm He was raised in New Concord, Ohio. Glenn studied science at Muskingum College, and received his private pilot’s license for physics course credit in 1941.

When the attack on Pearl Harbor brought the United States into World War&nbsp;II, he left college to enlist in the U.S.&nbsp;Army Air Corps; however, the Army did not call him up, and in March&nbsp;1942 he enlisted as a United States Navy aviation cadet. He trained at Naval Air Station Olathe, Kansas, where he made his first solo flight in a military aircraft. During advanced training in 1943 at the Naval Air Station Corpus Christi, he was reassigned to the U.S.&nbsp;Marine Corps.

After completing his training, Glenn was assigned to Marine squadron VMJ-353, flying R4D transport planes. He eventually managed a transfer to VMF-155 as an F4U&nbsp;Corsair fighter pilot, and flew 59 combat missions in the South Pacific.Shettle USMC Air Station of WWII, p. 167 He saw action over the Marshall Islands, where he attacked anti-aircraft batteries and dropped bombs on Maloelap Atoll. In 1945 he was assigned to Naval Air Station Patuxent River, Maryland, where he was promoted to Captain shortly before the war ended.

Glenn flew patrol missions in North China with the VMF-218 squadron, until it was transferred to Guam. In 1948 he became a flight instructor at Naval Air Station Corpus Christi, Texas, then attended the amphibious warfare school.

Glenn was next assigned to VMF-311, flying the new F9F&nbsp;Panther jet interceptor. He flew his Panther in 63&nbsp;combat missions during the Korean War, gaining the dubious nickname "magnet ass" from his apparent ability to attract enemy flak. Twice he returned to base with over 250&nbsp;flak holes in his aircraft.Mersky USMC Aviation, p. 183 Glenn flew for a time with Ted Williams, a future hall of fame baseball player for the Boston Red Sox, as his wingman. He also flew with future Major General Ralph H. Spanjer.

Glenn flew a second Korean combat tour on an interservice exchange program with the United States Air Force, 4th Fighter Wing. He logged 27&nbsp;missions in the faster F-86F&nbsp;Sabre, and shot down three MiG-15s near the Yalu River in the final days before the ceasefire.

Glenn returned to NAS Patuxent River, appointed to the Test Pilot School (class&nbsp;12). He served as an armament officer, flying planes to high altitude and testing their cannons and machine guns. On July 16, 1957, Glenn completed the first supersonic transcontinental flight in a Vought F8U-1P Crusader.