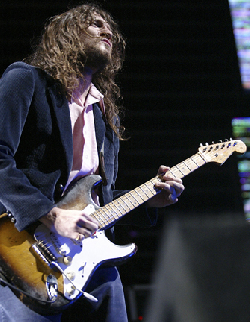 John Anthony Frusciante ( born March 5, 1970) is an American multi-instrumentalist, singer, songwriter, record and film producer. He is best known as the guitarist of the rock band Red Hot Chili Peppers, with whom he recorded five studio albums, and of whom he was a member from 1988 until 1992 and again from 1998 until 2009. He has recorded with numerous other artists, including The Mars Volta, for whom he was a studio guitarist (and occasional live performer) from 2002-2008, and Josh Klinghoffer and Joe Lally, with whom he released two albums as Ataxia. Frusciante also has an active solo career, having released eleven solo albums; his recordings include elements ranging from experimental rock and ambient music to New Wave and electronica.

Frusciante joined the Red Hot Chili Peppers at the age of eighteen, first appearing on the band’s 1989 album, Mother’s Milk. The group’s follow-up album, Blood Sugar Sex Magik (1991), was a breakthrough success. Frusciante became overwhelmed by the band’s new popularity and quit in 1992. He became a recluse and entered a long period of drug addiction, during which he released his first solo recordings: Niandra Lades and Usually Just a T-Shirt (1994) and Smile from the Streets You Hold (1997). In 1998, he successfully completed drug rehabilitation and rejoined the Red Hot Chili Peppers. Their next album, Californication (1999) would eventually go on to sell 16 million copies. His album To Record Only Water for Ten Days was made in 2001. A fourth album with the Chili Peppers, By the Way was released in 2002. On a creative spree, Frusciante released six solo albums in 2004; each album explored different recording techniques and genres. 2006 saw the release of his fifth and final album with the Chili Peppers, Stadium Arcadium. In 2009, Frusciante released The Empyrean, which features Flea and Josh Klinghoffer, and announced he had again parted ways with the Chili Peppers. Frusciante has produced and/or recorded with the Wu-Tang Clan, The Mars Volta and Omar Rodriguez Lopez, Swahili Blonde, The Bicycle Thief, Glenn Hughes, Ziggy Marley, Johnny Cash, George Clinton, and others.

Frusciante has received critical recognition for his guitar playing, ranking at number 18 on Rolling Stones list of "The 100 Greatest Guitarists of All Time" in 2003; and again in a second list published in 2011, where he ranked at number 72. He was ranked as number 42 in Gibson’s list of the "50 Best Guitarists of All Time". He was voted "The Best Guitarist of the Last 30 Years" in a 2010 BBC poll called "The Axe Factor". Frusciante was inducted into the Rock and Roll Hall of Fame as a member of the Red Hot Chili Peppers on April 14, 2012 although he did not attend the ceremony.

Frusciante was born in Queens, New York on March 5, 1970. His father, John Sr., is a Juilliard-trained pianist, and his mother Gail was a promising vocalist who gave up her career to be a stay-at-home mother.Rotondigic, James (November, 1997). "Till I Reach the Higher Ground". Guitar Player. Frusciante’s family moved to Tucson, Arizona, and then Florida, where his father served as a Broward County judge until October 2010. His parents separated, and he and his mother moved to Santa Monica, California.

A year later, Frusciante and his mother moved to Mar Vista, Los Angeles with his new stepfather who, he says, "really supported me and made me feel good about being an artist." Like many young people in the area, he became intimately involved in the L.A. punk rock scene. At nine he was infatuated with The Germs, wearing out several copies of their record (GI). By ten, he had taught himself how to play most of (GI)’s songs. He has stated that he didn’t really know what he was doing, and that he would play every chord with a single-finger barre.

Frusciante began studying guitarists like Jeff Beck, Jimmy Page, David Gilmour and Jimi Hendrix at eleven. He discovered Frank Zappa, whose work he would study for hours. Frusciante first heard of the Red Hot Chili Peppers around 1984 when his guitar instructor was auditioning as a guitarist for that band. He dropped out of high school at sixteen with the permission of his parents and completion of a proficiency test. With their support, he moved to Los Angeles in order to develop his musical proficiency. He began taking classes at the Guitar Institute of Technology, but turned to punching in without actually attending and left shortly thereafter.