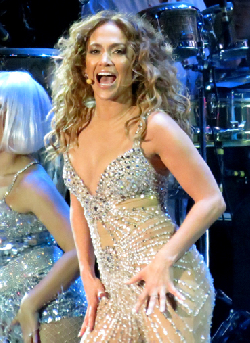 Jennifer Lynn Muñiz (née Lopez; born July 24, 1969) is an American entertainer, businesswoman, producer and philanthropist. She became interested in pursuing a career in the entertainment industry following a minor role in the 1986 film My Little Girl, to the dismay of her Puerto Rican parents, who believed that it was an unrealistic career route for a Hispanic. Lopez gained her first regular high-profile job as a Fly Girl dancer on In Living Color in 1991, where she remained a regular until she decided to pursue an acting career in 1993. She received her first leading role in the Selena biopic of the same name in 1997. Lopez became the first Latina actress to earn over $1 million for a role the following year, with the film Out of Sight. She ventured into the music industry in 1999 with her debut studio album, On the 6, joining a select few in successfully converting from a film to a music career.

With the simultaneous release of her second studio album J.Lo and her film The Wedding Planner in 2001, Lopez became the first person to have a number one album and film in the same week. Her 2002 remix album, J to tha L–O! The Remixes, was the first in history to debut at number one on the US Billboard 200, while her fifth studio album, Como Ama una Mujer (2007), received the highest first-week sales for a Spanish album in the United States. Lopez has established herself as a prominent figure in both the film and music industry, in a career spanning four decades. With records sales of 75 million and a cumulative film gross of over $2 billion, Lopez is regarded as the most influential Hispanic performer in the United States, as well as the highest-paid Latin actress. Her rags to riches story is considered a rarity, having innovated Latin influence in the entertainment community which it lacked for decades.

Lopez’s public image and personal relationships have attracted worldwide media attention. Lopez’s first high profile relationship was with media mogul Sean Combs, who accompanied her to the 2000 Grammy Awards where she wore the infamous Green Versace dress. She became romantically involved with actor Ben Affleck, who would later become the muse of her third studio album This Is Me… Then (2002), while still married to her second husband Cris Judd. Lopez wed long-time friend Marc Anthony in 2004 and gave birth to their twins, Emme and Maximilian, in February 2008. The entertainer has used her position as a global icon of pop culture to begin her own empire, consisting of various clothing lines, accessories, fragrances, a production company, television shows and a charitable foundation among other activities. As of 2012, Lopez has an estimated net worth of $250 million.

Since the beginning of her career, Lopez been recognized for her numerous contributions, garnering various awards. Widely termed as the most influential Hispanic performer, she is credited for breaking stereotypical racial barriers in the entertainment industry. Cindy Pearlman of The Record stated that she is responsible for the introduction of "Latina presence" into he film industry which was a "whites-only preserve" for much of its history. In Icons of American Popular Culture (2009), author Robert C. Cotrell describes Lopez as the Hispanic version of Oprah Winfrey, stating that she is the embodiment of the American dream, "Boasting a far more authentic rags-to-riches tale". Cotrell stated that she is a "multidimensional artist who had turned into a financial powerhouse" while demonstrating that an "A-lister" could still be successful as "a top recording artist, and operate as a major player in the corporate world". Her critically acclaimed performance in the film Selena garnered her a Golden Globe nomination for Best Actress in a Motion Picture Musical or Comedy, while also influencing a younger generation of Latin actors. Ashley Mott of Yahoo! Voices stated that her record-breaking paycheck demonstrated that Latin women could achieve success, noting Lopez to be "one of the first in a generation of women in entertainment to create a veritable empire in a short time". Following Selena, she was recognized as the highest-paid Latin actress after earning $2 million for her critically acclaimed role in Out of Sight. Lopez is often credited with having cultural importance to the Caucasian, African American and Ethnic population in the United States. In Dance and the Hollywood Latina: Race, Sex, and Stardom (2011), author Priscilla Peña Ovalle opines that Lopez "has arguably become the century’s most successful Latina by mobilizing the myth through in-betweeness and racial mobility" Miriam Jiménez Román states in The Afro-Latin Reader: History and Culture in the United States (2009) that Lopez is "necessary" to the African American and Latin culture, stating that when her lyrical use of the word nigger generated controversy, "[she] was able to traverse the difficult racial boundaries". Román considered Lopez to represent the suppressed history of hip hop culture which was "as much Jamaican and Puerto Rican as African American".