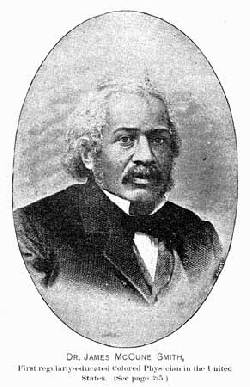 In addition to practicing as a doctor for nearly 20 years at the Colored Orphan Asylum in Manhattan, Smith was a public intellectual: he contributed articles to medical journals, participated in learned societies, and wrote numerous essays and articles drawing from his medical and statistical training. He used his training in medicine and statistics to refute common misconceptions about race, intelligence, medicine, and society in general. Invited as a founding member of the New York Statistics Society in 1852, which promoted a new science, he was elected as a member in 1854 of the recently founded American Geographic Society. But, he was never admitted to the American Medical Association or local medical associations.

He has been most well known for his leadership as an abolitionist; a member of the American Anti-Slavery Society, with Frederick Douglass he helped start the National Council of Colored People in 1853, the first permanent national organization for blacks. Douglass said that Smith was "the single most important influence on his life."Morgan (2006), p. 612 Smith was one of the Committee of Thirteen, who organized in 1850 in New York City to resist the newly passed Fugitive Slave Law by aiding fugitive slaves through the Underground Railroad. Other leading abolitionist activists were among his friends and colleagues. From the 1840s, he lectured on race and abolitionism and wrote numerous articles to refute racist ideas about black capacities.

Both Smith and his wife were of mixed-race African and European ancestry. As he became economically successful, he built a house in a good neighborhood; in the 1860 census he and his family were classified in that neighborhood as white, whereas in 1850 they were classified as mulatto. He served for nearly 20 years as the doctor at the Colored Orphan Asylum in New York but, after it was burned down in July 1863 by a mob in the New York Draft Riots, in which nearly 100 blacks died, Smith moved his family and practice out to Brooklyn for safety. The parents stressed education for their children. In the 1870 census, his widow and children continued to be classified as white. To escape racial discrimination, his children passed into white society: the four surviving sons married white spouses; his unmarried daughter lived with a brother. They worked as teachers, a lawyer, and business people.

Smith’s unique achievements as a pioneering African-American doctor were rediscovered by twentieth-century historians. They were relearned by his descendants in the twenty-first century when a three-times-great-granddaughter took a history class and found his name in her grandmother’s family bible. In 2010, several Smith descendants commissioned a new tombstone for his grave in Brooklyn. They gathered to honor him and their African-American ancestry.

Smith was born free in 1813 in New York City (New York state had passed gradual abolition in 1799; children of slave mothers were born free but had to serve an indenture until early adulthood.) His mother, believed to be Lavinia Smith, achieved her freedom later in life; she said she was a "self-emancipated woman." She was born into slavery in South Carolina and had been brought to New York as a slave. Note: In the 1850 census, Smith’s household included Lavinia Smith, age 67; and three other older women. In the 1860 census, still part of Smith’s household, she listed her birthplace as South Carolina. His father was Samuel Smith, a white merchant and his mother’s master, who had brought her with him to New York from South Carolina., Journal of the Natl Med Assoc. 2003 Jul; 95(7):603-14, accessed 4 May 2012. Note: Glasgow University’s matriculation album for 1832 lists Smith as "the first natural son of Samuel, merchant, New York" (translated from Latin)Kharem (2009), p. 12