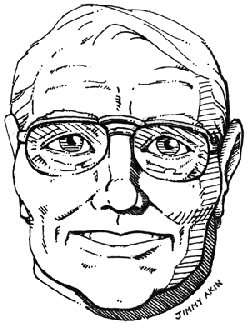 Jack Thomas Chick (born April 13, 1924) is an American publisher, writer, and comic book artist of evangeical fundamentalist Christian tracts and comic books. His comics have been described by the Los Angeles Magazine as "equal parts hate literature and fire-and-brimstone sermonizing".

Chick’s company, Chick Publications, claims to have sold over 750 million tracts,Chick publications website header. comics tracts, videos, books, and posters designed to promote Protestant evangelism from a Christian fundamentalist perspective or point of view. Many of these are controversial, as they accuse Roman Catholics, Freemasons, Muslims and many other groups of murder and conspiracies, while Chick maintains his views are simply politically incorrect."Over the years, Jack Chick has written some stories that were so hot, that touched such politically incorrect issues, that often people were afraid to pass them out on the streets." at chick.com

His views have been spread worldwide, mostly through the tracts and now online. They have been translated into more than 100 languages. As evidenced from his writings and publications, Chick is an Independent Baptist who follows a premillennial dispensationalist view of the end times. He is an ardent believer in the King James Only movement, which posits that every English translation of the Bible more recent than 1611 promotes heresy or immorality.

Chick was born in Boyle Heights, California in 1924. Jack Chick’s family later moved to Alhambra where Chick was active in the high school drama club. Chick’s official biography notes that he was not religious in high school and was in fact avoided by Christian students, who believed "he was the last guy on earth who would ever accept Jesus Christ."

After his graduation, he continued his drama education at the Pasadena Playhouse School of Theater on a two-year scholarship. In February 1943, Chick was drafted as a private in the U.S. Army. He served for three years in the Pacific theater, serving in New Guinea, Australia, the Philippines and Japan. Chick credits his time overseas with inspiring him to translate his tracts into many different languages and says he has "a special burden for missions and missionaries."

After the war, he returned to the Pasadena Playhouse and met his wife while working on a production there. Lola Lynn Priddle (1926–1998), a Canadian immigrant, came from a very religious family, and Chick’s official biography describes her as "instrumental in his salvation."Ancestry.com, Detroit Border Crossings and Passenger and Crew Lists, 1905-1957 [database on-line], Provo, UT, USA: The Generations Network, Inc., 2006. Priddle and her parents introduced Chick to the Charles E. Fuller radio show, the Old Fashioned Revival Hour, and Chick relates that he was converted while listening to an episode of this show. They married in 1948 and had one child, Carol, who died in 2001. In February 1998, Lola Lynn died and Chick has since remarried. In a 2005 issue of Battle Cry, Chick reported that he had suffered a heart attack while being transported to the hospital suffering from hypoglycemia. Shortly thereafter he had a triple coronary artery bypass.

Very little is known about Jack Chick; he lives a reclusive life and has given only one known professional interview since 1975. His reclusiveness created speculation in the past that he was a pen name for an unnamed author or authors. Several audio cassettes of his preaching distributed to his subscribers purport to contain his voice. While he has never released a photo of himself for publication, purported photos of Chick have been published by others.

After converting to Christianity, Chick wanted to evangelize others, but was too shy to talk to people directly about religion. Chick heard from missionary Bob Hammond, who had broadcast in Asia on the Voice of America, that the Communist Party of China had gained significant influence among ordinary Chinese in the 1950s through the distribution of small comic books. Chick also began working with a prison ministry and created a flip chart of illustrations to use with his presentation. He hit upon the idea of creating witnessing tracts, which could be given to people directly or indirectly.