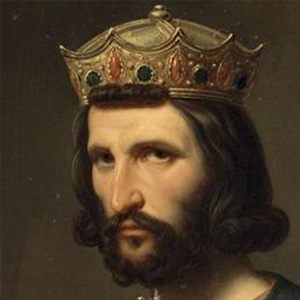 The sense of the name Capet was lost already in the eighth century, but he was probably given that name because of some particular feature in his costumes (it was more likely about his hat). One can find some more variants in different sources: Capito, Caputius, Capetus, Capatus, and later in the twelve century – Huon Chaped. There was one more variant in a French epos – Huon Chapet (chanson de geste).

Election for the throne

Hugo was the oldest son of Hugo the Great and Hadwig, who was the sister of Ottos I. After his father was dead, Hugo Capet inherited French kingdom and also Parish and Orleans counties. He got Poitiers from king Lothar, but he had to support him in his fighting against of rebellious vassals who tried to capture Lorraine.

In 986 Lothar died, but before that he had entrusted his 19 years old son (who was to inherit the throne), Louise, to Hugo Capet, who was to defense the young prince. After his 15 months long of reigning, Louise V Lazy died, all that time the power was almost in Hugo Capet’s hands. Louise had no children left. The legal heir for the throne should have been Lothar’s brother, Carl, who was the duke of the South Lorraine. But French feudal elected Hugo Capet as the king on their meeting. Even Rheims archbishop Adalberon supported Hugo Capet. On 3 July 987 Hugo Capet became the king of Lottaire.

Electing Hugo Capet was the bright example demonstrating the feudal system of political organization. The feudal system fully developed just by the time Hugo Capet became the king; it was by the end of the tenth century. Hugo, as he became the Lorraine king, didn’t become more powerful because of the fact. By for the feudal vassals the title of king didn’t meant as much as is used to. Having elected the most powerful of the pretenders, Hugo Capet, they gave him title instead of actual power.

Some historical noticed that electing Hugo Capet was the last step in fighting of races that would lead to the crash of Great Carl’s empire and separation of people according to their nations. Afterwards the German leaders were banished and replaced with local leaders of Gaul origin.

Anyway, electing Hugo Capet for the throne was not actually the starting of the new dynasty, as feudal lords understood it. Hugo tried to attract feudal to his side, promising to accept the heredity of their domains. Before that there was no legal permission of inheriting those domains. Hugo used to strengthen the defence of many cities. As it was a necessity, protecting them not only from Northman, but also from vassals.

Paris became the capital of France again, as it used to be before, when Carolings were the kings.

Hugh Capet’s wife was Adelaide, who was daughter of William Towhead of Count of Poitou. They had a few children: Gisela, or Gisele ( married Hugh I, Count of Ponthieu), Hedwig (or Hathui),who married Reginar IV( also from Count of Hainaut), Robert II (who would became the king after his father died) Hugo Capet also had a few daughters, but there could hardly be found any historical facts about them.