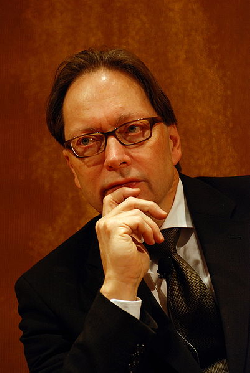 In October 2008, Engdahl told the Associated Press that the United States is "too insular and ignorant to challenge Europe as the center of the literary world" by Suzanne Goldenberg, The Guardian, Thursday 2 October 2008 and does not really "participate in the big dialogue of literature."; New York Times, October 4, 2008, by Charles McGrath His comments generated controversy across the Atlantic, with the head of the U.S. National Book Foundation offering to send him a reading list. Engdahl was reported "very surprised" that the American reaction was "so violent". He did not think that what he said was "that derogatory or sensational" and conceded his comments may have been "perhaps a bit too generalizing".

Engdahl was born in Karlskrona, Blekinge, Sweden. He earned his B.A. in 1970 http://www.svenskaakademien.se/web/Horace_Engdahl_1.aspx at Stockholm University; he earned his doctoral degree (fil. dr.) in 1987, with a study on Swedish romanticism, but had meanwhile been active as a literary critic, translator and journal editor, and was one of the introducers of the continental tradition of literary scholarship in Sweden. He is adjunct professor of Scandinavian literature at the University of Aarhus in Denmark. He speaks Swedish, English, German, French and Russian fluently.

On 16 October 1997, Engdahl became a member of the Swedish Academy, elected to seat number 17 vacated by the death of Johannes Edfelt; on 1 June 1999, he succeeded Sture Allén as the Academy’s permanent secretary, i.e. its executive member and spokesperson. As such, he had the annual task of announcing the recipient of the Nobel prize in literature to the public. On 20 December 2008 it was announced that after ten years Engdahl would step down as the Academy’s permanent secretary on 1 June 2009.

He is married to Ebba Witt-Brattström, professor of literature at Södertörn University outside Stockholm. Together they have three sons.